About eight years before the Department of State was set up under the Constitution, the Department of Foreign Affairs, directed by a Secretary for Foreign Affairs, was established by a resolution passed by the Continental Congress on January 10. 1781.1 This new Department was justified by the Congress on the basis that "the extent and rising power of these United States entitles them to a place among the great potentates of Europe while our political and commercial interests point out the propriety of cultivating with them a friendly correspondence and connection."2 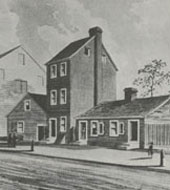 The new Secretary for Foreign Affairs was Robert R. Livingston,3 a delegate from New York and a former member of the Foreign Affairs Committee.4 Soon after taking office, Livingston set up his offices in a small, plain, brick house at 13 South Sixth Street, a short distance north of the northeast corner of Sixth and Chestnut Streets, in Philadelphia.5 This building was the first home of an office of foreign affairs as an entity separate from Congress, although the Secretary was still, in reality, an agent of Congress, which continued to involve itself closely in the conduct of foreign relations.

The building at 13 South Sixth Street had been erected in 1773. Measuring but 12 feet across the front by 30 feet in depth, it consisted of three stories and an attic, with two rooms to each story; it had a gable roof which sloped to front and rear.6 A room on the second floor overlooking the street served as Livingston's office. Various "great personages" of the time "frequently clambered up the dark and narrow winding stairs" to transact business with the Secretary.7

The new Department was very small in those early days. Livingston estimated the Department's total contingent expenses for 1783 for messenger, stationery, office hire, wood, and candles to be the relatively modest sum of $1,200.8 Livingston's staff, when it was fully organized, consisted of two Under Secretaries, Lewis Richard Мorris and Pierre Etienne DuPonceau;9 a clerk and translater of French, the Reverend John P. Tetard; and clerk, Walter Stone.10 The two Under Secretaries shared the back room of the second floor, and the translator and the clerk occupied the ground [Page 7]floor.11 This staff dealt with an American diplomatic corps which consisted at the time of Livingston's resignation on June 4, 1783, of five Ministers Plenipotentiary, all of whom, except Jefferson, were engaged in negotiating peace in Paris. Benjamin Franklin was the Minister in Paris, John Adams had been accredited to the Hague and John Jay to Madrid, and Henry Laurens and Thomas Jefferson, with the same rank as their colleagues, were Commissioners for the negotiation of peace.12

The building at 13 South Sixth Street ceased to be the home of the Department of Foreign Affairs after Livingston resigned. A succession of tenants then occupied it, using it at different times as a residence, a shop, and a boarding house.13

In 1844, this and adjoining property extending to the corner of Sixth and Chestnut Streets was purchased by Abraham Hart, member of a firm of booksellers, who tore down the old buildings in March 1846 and erected a five-story building known as "Hart's Buildings." This building, which was occupied by stores and other businesses, was destroyed by fire on December 26, 1851. It was rebuilt by the new owner, A. J. Drexel, in the 1890s.14 The entire city block where the house at 13 South Sixth Street formerly stood now forms part of Independence Mаll.15

When Livingston resigned as Secretary of the Department of Foreign Affairs, Congress again assumed direct control of foreign relations until a successor to Livingston could be named. In the resolution accepting Livingston's resignation, Congress directed that the Department's papers should be turned over to the Secretary of Congress, Charles Thomson.16 In a letter to Livingston dated, June 4, 1783, Thomson wrote that, "as the resolve only directs me to receive the papers into my care, and as I am determined to have nothing to do with the business of the office, I must beg the favor of you to order all the papers packed up, sealed with your seal, and then sent to my office, where they shall lie until Congress shall otherwise dispose of them."17 The Department's papers were turned over to Thomson, apparently on June 6.18