Approximately three days after entered upon his duties as Secretary of State, succeeding on May 2, 1801, the Department of State began to move from one of the Six Buildings on Pennsylvania Avenue to a newly constructed building west of the White House. The move was completed about the middle of June. Some boxes containing models belonging to the Patent Office had already been moved to the still unfinished new building about the last week in December 1800.1 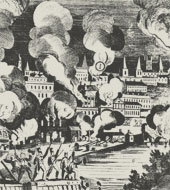 Included in this highly imaginative view of the , August 24-25, 1814, is the Public Building West of the White House (marked I).

This building was known in its day as "the New Building," "the War Office," and "the public building west of the President's house."2 Located where the center wing and west-center entrance of the Old Executive Office Building are now, it was the second of two structures intended to house the executive offices of the government, the other being the already described3 Treasury Department Building on the east side of the White House.

On July 23, 1799, while the Treasury Department Building was still under construction, the Commissioners for the District of Columbia had sought proposals for the erection of a second executive office building, to be located on the west side of the White House. This building was to be like the Treasury Department Building—"of similar Dimensions & form in every respect"—except that "the Foundation will be laid ten feet deeper from the Surface of the Ground."4 It was "sunk to the eaves in a hollow prepared for it, so that it might be on a level with the Treasury,"5 and from this fact it was commonly said to have been "built in a hole in the ground."6

On August 6, 1799, the Commissioners entered into a contract for the construction of this building with Leonard Harbaugh, the builder of the Treasury Department Building. The price was $39,511, exactly the same amount as for the Treasury Department Building. Construction was to begin within six weeks and was to be finished by November 1, 1800.7 The building was not completed, however, until about April 30, 1801.8

The available records indicate that the size and the style and details of construction of this building were in all respects similar to those of the Treasury Department Building. It was a plain two-story structure of brick on a freestone foundation, with a basement and a dormer-windowed attic. About 149 feet in length, east and west, and 57 ½ feet in breadth, it stood with its west end near the east side of Seventeenth Street just above F Street. On each floor a corridor ran the length of the building, with rooms on each side.9 There were fourteen rooms on the first floor, fourteen on the second floor, and eight in the attic. Twenty-four of the rooms were 17 by 20 feet, eight were of nearly the same dimensions, and four were fireproof rooms of 10 by 12 feet.10 The roof was of shingle; the window sills were of stone; there were numerous fireplaces; the rooms and corridors were plastered and whitewashed; and the windows were fitted with venetian blinds.11 A well supplied water for the building.12 Bookshelves from the Six Buildings were set up in the attic of the new building, as well as 675 feet of new shelving. A set of bookcases in six parts was purchased for the Secretary's room, and at least three of the four iron grates that the Department had installed in the house among the Six Buildings were set up in the new building.13

A contemporary British diplomat seemed unimpressed with the Department's new home. He wrote that in this building "the Secretary of State received Foreign Ministers in a very indifferent little room into which they were ushered by his clerk."14 For a time the new building housed not only the Department of State, in-[Page 30][Image: Included in this highly imaginative view of the British invasion of Washington, August 24-25, 1814, is the Public Building West of the White House (marked I).] cluding the Patent Office, but also the War Department, the Navy Department, the General Post Office, the City Post Office, and offices of both the Superintendent and the Surveyor of the city of Washington. By March 1810 the Department of State occupied one small fireproof room on the first floor, four rooms on the second floor (including one room, occupied by the Patent Office, which had been created by partitioning off part of the corridor), and four rooms in the attic. Apparently the small fireproof rooms and the attic rooms were used only for the storage of books and records.15

The Blodget Hotel Building was a three-story brick structure located on the northeast corner of Eighth and E Streets Northwest, fronting on E Street. It was erected in 1793-1795 by Samuel Blodget, a speculator in Washington real estate, but it had remained unfinished and unoccupied until its purchase by the government under authority of an act of Congress, approved April 28, 1810.16 The following description of the building was published in 1816:

"The Patent Office, constructed according to the plan of J. Hoban, esquire, (who gained the prize for that of the President's house,) consists of three stories, and is a hundred and twenty feet long, and sixty feet wide. It is ornamented with a pediment, and six Ionic pilasters. From the eminence on [Page 31] which it stands, the richly-wooded hills rise on every side, and form a scenery of unequalled beauty."17 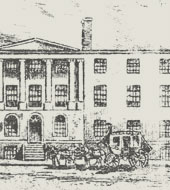 Blodget's Hotel, home of the Patent Office from 1810 to 1836.
The Patent Office originally occupied two large rooms and two small rooms in the west or Eighth Street wing of the second floor. In 1829 it and the City Post Office were moved into a newly constructed addition to the building which faced Seventh Street. The entire building, including everything belonging to the Patent Office, was destroyed by fire on December 15, 1836.18

The Departments of State, War and Navy remained in the building west of the White House until August 1814. It was in this building that Robert Smith succeeded Madison as Secretary of State on March 6, 1809 (Madison had succeeded Jefferson as President on March 4, 1809), and was in turn succeeded by on April 6, 1811. The Department of State remained virtually unchanged during this period. In a report made on January 1, 1807, Secretary Madison listed the personnel of the Department, gave a brief description of their duties, and listed their salaries. The Secretary's salary was still $5,000 and the total for the other eight employees was $7,812.19

While the Department of State was in this building, the United States declared war with England on June 18, 1812. During the War of 1812, British forces invaded Washington on August 24, 1814. That night and the following morning they burned the Capitol, the White House, and the two executive office buildings, including that occupied by the Department of State, and destroyed other property both public and private.

Five days earlier, President Madison had suggested that Secretary of State Monroe leave Washington to investigate the British advance. Sighting the enemy the following day, Monroe at once sent orders directing the officers of the Department of State to save the records. (At that time the records of the Department included, besides those of its own activities since 1789, the Declaration of Independence, the Constitution, the records of the Continental Congress, the original laws and treaties of the United States, and other valuable papers.)

The clerks of the Department immediately placed the records in linen bags and loaded them into carts. They were taken first to a vacant gristmill on the Virginia side of the Potomac two miles above Georgetown, and then, because that location seemed unsafe, to Leesburg, Va., where they were kept for "some weeks."20 (The records and models of the Patent Office, which were then in the Blodget Hotel Building, were spared by the invaders.)

In response to a resolution of the House of Representatives of October 24, 1814, requesting information regarding the destruction of official books and papers of the respective Departments in the British invasion of August 1814, the Secretary of State ad interim reported on November 14 as follows:

"... when it became apparent from the movements of the enemy, after his debarkation at Benedict, [Maryland,] that his destination was the seat of Government, every exertion was made, and every means employed, for the removal of the books and papers of this office, to a place of safety; and, notwithstanding the extreme difficulty in obtaining the means of conveyance, it is believed that every paper and manuscript book of the office, of any importance, including those of the old Government, and all in relation to accounts, were placed in a state of security.... it was not found practicable however, to preserve, in like manner, the volumes of laws reserved by Congress for future disposition; many of the books belonging to the library of the Department, as well as some letters [Page 32]on file of minor importance from individuals on business mostly disposed of, which were unavoidably left, and shared the fate, it is presumed, of the building in which they were deposited." 21 Because of the quick action of Secretary Monroe and his colleagues, many important historical documents had been saved. One historian stated that these men "deserve public gratitude for... indelible shame... would have followed if... [the British] had carried away with them, as trophies of their exploit, the original of the Declaration of Independence and the Constitution of the United States."22 The home of the Department of State, however, did not fare as well. All that remained of this building were the stone foundations and the brick outer walls. A report by George Hadfield dated October 13, 1814, on "the present state of the Public Buildings," includes the following paragraph regarding the two executive office buildings:

"The Public Offices, These two Buildings in consequence of their having been executed entirely of brick, in the upper structure of the outward walls, have sustained, without material injury, the violence of excessive heat; The apparent and actual damage can be easily corrected by the facility with which bricks can be removed, and replaced in a Building; here also an advantage presents itself from calamity, by affording the opportunity of erecting these Buildings in the interior, of solid material, and thereby render them fireproof, an object often wished in their former state, for the certain preservation of the Public Documents from accidental fire;[.]"23