On July 16, 1790, while still in New York, an act of Congress was approved to change the seat of government to Philadelphia. 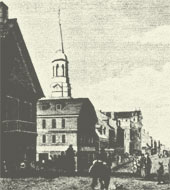 The buildings occupied by the Deparment of State in Philadelphia were in the general area shown here in a view of Second Street, north from Market Street, drawn and engraved by W. Birch & Son.
The law provided:

“That prior to the first Monday in December next, all offices attached to the seat of the government of the United States, shall be removed to, and until the said first Monday in December, in the year one thousand eight hundred, shall remain at the city of Philadelphia, in the state of Pennsylvania, at which place the session of Congress next ensuing shall be held.”1

By October 13, 1790, the Department was beginning to get established in a building at 307 Market Street.3 The building was on the north side of that street between Eighth and Ninth Streets.4 It was “directly opposite” the house Jefferson had chosen for his residence. The building was “three stories high with a garret, kitchen and stable,”5 and its windows were fitted with venetian blinds.6 Rent for the the building was $186.67 a year.7

Department remained in this building until April 1793.8 During this time, Jefferson’s staff consisted of the Chief Clerk, three clerks, a clerk for foreign languages, and an officekeeper-messenger.9

Expenses for the Department at this time were still relatively low. In 1790, Jefferson estimated that the Department’s expenses for one year would be $7,961. Of this amount $7,300 was for the salaries of the Secretary and his staff. The remaining $691 covered office rent, firewood, stationery, newspapers, gazettes, contingencies, etc.10 When Jefferson turned his office over to Edmund Randolph at the end of 1793, the expenses of the Department had increased to $9,661.67.11

The cost of foreign intercourse was considerably higher inasmuch as a Minister’s salary was $9,000 and a Charge d’Affaires’ salary was $4,500, compared to the Secretary’s salary of $3,500. In the report made in November 1792, Jefferson estimated that the $40,000 appropriated for the Foreign Fund was ample for existing needs of the service abroad.12