Sometime between December 24, 1784, when Congress adjourned its session in Trenton, and January 11, 1785, the seat of government was moved to New York City. The first meeting place for Congress in New York was the City Hall. 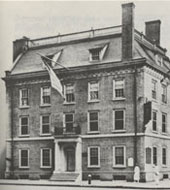 Although some have stated that the first location of the Department of Foreign Affairs in New York was also in the City Hall in a room above the Council chamber, an item in a Department account book under date of January 19, 1785, seems to contradict this. It indicates "cash paid a cartman for hauling two cases belonging to the Office, from the City Hall, where they had been carried thro' mistake with the Boxes of the Secretary's [Charles Thomson, Secretary of Congress] Office."1

The location of the Department from January 11, 1785, to April 30, 1788, was in a building known as "Fraunces Tavern," which was owned by Samuel Fraunces, a noted innkeeper.2 Fraunces Travern was situated on the southeast corner of Great Dock (now Pearl) and Broad Streets.3

The Department of Foreign Affairs shared Fraunces Tavern with the War Office,4 occupying approximately 5 rooms initially, and perhaps for the duration of its stay in Fraunces Tavern. At least one of the rooms was on each of the first two floors.5

Charles Thomson, on behalf of Congress, leased the tavern for two years, commencing May 1, 1785.6 He was acting under authority of a resolution passed by Congress on April 4, 1785:

"Resolved, by nine states, That the Secretary of Congress take a lease from Samuel Frauncis [sic] for his house, now occupied by the public, for the term of two years, at the rate of eight hundred and twelve dollars and one half of a dollar a year:

"That a warrant be drawn in favour of the said Samuel Frauncis for the sum of sixteen hundred and twenty five dollars, on account of the said rent, and to discharge a mortgage on said house...."7

In January 1787 Secretary Jay requested that the Department be moved into the City Hall in May when the lease of Fraunces Tavern would expire. He was informed that no rooms could be spared for that purpose.8 Accordingly, the Department of Foreign Affairs, and the War Department as well, remained in Fraunces Tavern for another year, from May 1, 1787 to April 30, 1788. (Certain offices of the Treasury Department were also located there during this period.)9

The building known as "Fraunces Tavern"10 was erected as a residence in 1719 by Stephen de Lancey, a French Huguenot who had come to New York in 1686 and who had subsequently amassed a fortune as a merchant. It was considered one of the finest homes in the city.

Having a frontage of 55 feet on Pearl Street and extending back 42 feet along Broad Street,11 it was built of red English brick in front and of yellow Dutch brick on the Broad Street side. It consisted of three stories plus cellar and attic, with a French roof covered with tile and lead. On the second floor was a room called the "Long Room," which was well adapted to public entertainment. Offering the property for sale in the New York Royal Gazette of March 17, 1781, Fraunces described it as follows:

"AN elegant Three Story and a Half Brick Dwelling House, situated in Great Dock Street, at the corner of Broad Street, the property of Mr. Samuel Fraunces, and for many Years distinguished as the Queen's Head Tavern; in which are nine spacious Rooms, besides five Bed-chambers, with thirteen Fire places, an excellent Garret in which are three Bed rooms well finished, an exceeding good Kitchen, and a Spring of remarkable fine Water therein; a most excellent Cellar under the whole, divided into three commodious apartments; a convenient Yard with a good Cistern and Pump, and many other conveniences too tedious to mention; the whole in extraordinary good repair,... "

The building had served as de Lanсey's residence from its completion until the early 1730's. It was owned thereafter, but not occupied, by the de Lancey family until 1759, when it was purchased by the firm of de Lancey, Robinson & Company, which used it as an office and warehouse.

In 1762 the firm sold the property for £2,000 to Samuel Fraunces, a West Indian of French extraction, who opened the building to the public as a tavern, and succeeded in making it the [Page 15] most noted hostelry in colonial New York. Prior to the Revolutionary War it was known as the "Queen's Head Tavern."

From 1765 to 1770 Fraunces leased the building to others. He took possession again in 1770 and conducted the tavern until shortly before the British captured the city in September 1776 and made him a prisoner. According to his own account, he "submitted to serve for some Time in the Menial Office of Cook in the Family of General Robertson [General James Robertson, British Governor of New York City, 1780-1783] without any Pay, or Perquisite whatsoever, Except the Priviledge of disposing of the Remna[n]ts of the Tables which he appropriated towards the Comfort of the American Prisoners within the City."12 Exactly when Fraunces resumed operation of the tavern is not known, but his offer of sale on March 17, 1781, was unsuccessful, and it is of record that he was running it in 1783 and 1784. On April 23, 1785, shortly after leasing the premises to Congress, he sold the property to George Powers, a Brooklyn butcher, for £1,950.

Throughout most of its history the tavern has been the scene of banquets and entertainments attended by notables of history. Among incidents of historic interest that took place there were the founding of the New York Chamber of Commerce on April 5, 1768, a public dinner given by Governor Clinton to General Washington on November 25, 1783, and General Washington's farewell to his officers on December 4, 1783.

By the beginning of the twentieth century, as a result of wear and tear through the years, of damage by fire, and of reconstruction and remodeling, the building had lost all its characteristics of colonial architecture. In 1904 it was purchased by the Sons of the Revolution, who restored it in 1906-1907.13

John Jay served as Secretary for Foreign Affairs throughout the time the Department was at Fraunces Tavern. When he commenced his tenure of office, Henry Remsen, Jr., the Under Secretary previously elected by Congress, was his only subordinate.14 Gradually, Jay increased his staff to consist of Remsen as Under Secretary, two clerks, a salaried part-time translator of French, three men who translated Netherlandish, German, and Spanish respectively on a piecework basis,15 and a doorkeeper-messenger.16

As Secretary for Foreign Affairs, Jay strengthened the role of the Department in conducting foreign relations by channeling all foreign affairs matters through his office at Fraunces Tavern. Congress affirmed this in a resolution dated February 11, 1785, which required that all communications to and from the United States on the subject of foreign affairs be made through the Secretary, and that all letters, memorials, or other papers on the subject of foreign affairs for the United States be addressed to him. The Secretary was also authorized to appoint an interpreter so that in the future all papers written in a foreign language which might be communicated to Congress from the Department of Foreign Affairs would be accompanied with a translation into English.17

Although Jay's Department remained somewhat dependent on Congress in conducting foreign relations, it was gaining a degree of independence which would serve as the pattern for its successor—the Department of State—under the Constitution.