On May 1, 1788,1 the Department of Foreign Affairs with Jay still as Secretary, along with the War Office under Secretary Henry Knox, 2 moved from Fraunces Tavern to a house on Broadway.3 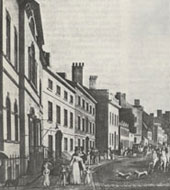 The first location of the Department of Foreign Affairs on Broadway was in the general area shown here.
The exact location of the house is not known. According to Gaillard Hunt, however, it was on the west side of Broadway near the Battery.4 It is clear that Jay’s residence was located in this area,5 which may indicate that his office was nearby. Whatever its exact location may have been, it long ago was destroyed to make way for the commercial development of that street.

The house was owned by Walter Livingston,6 a first cousin of Jay’s wife.7 Livingston had been a Member of the Continental Congress in 1784 and 1785, and he was one of three Commissioners of the United States Treasury from 1785 to 1789.8

The Department occupied two rooms, “one of which the Secretary reserves for himself and the Reception of such Persons as may have Business with him, and the other for his Deputy and [two] Clerks.”9 Rent for the house was paid by the Government at the rate of $625 (f250) a year, plus taxes of $4485.10

After occupying this building for only five months, the Department was obliged to move in October 1788 because the Congress had decided to use Jay’s office as its own meeting place.11 The War Office and “other Offices” of the Government remained in the building at least until April 30, 1789.12