The British attack on the Capital city, including the destruction of the public buildings, forced the government offices to locate elsewhere. Ten days after the British invasion, the Washington Daily National Intelligence announced (September 3, 1814): “The Public Offices will be accomodated in houses which have been tendered by their proprietors for that purpose, and will immediately recommence the usual routine of business. 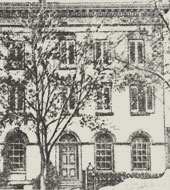 The issue of that newspaper for September 9, 1814, included this further information:

“The Public Buildings having been mostly destroyed, the various offices are locating themselves in those private houses which are most commodious and conveniently situated for the purpose. The President will occupy Col. Taylor’s large house, which was lately occupied by the French Minister. The Department of State occupies the house lately inhabited by Judge Duvall; the Treasury Department is fixed at the House formerly occupied by the British minister Foster; the War Office is in the building adjoining the Bank of the Metropolis. The Navy Office in Mr. Mechlin’s House near the West Market, and the General Post Office in one of Mr. Way’s new houses, &c. &c.” Therefore, sometime between September 3 and 9, 1814, the Department of State moved into “the house lately inhabited by Judge Duvall.”1

According to Department of State records, this house was located on the South side of G Street, between 17th and 18th Streets, Northwest.2 At least two Washington historians state that this building was located on the site of the present Young Men’s Christian Association Building on G Street.3 District of Columbia land records indicate that in 1814-1816 only one building stood in this approximate location, and this was a house situated on the westerly half of original lot 14 in square 169, astride the line between the former boy’s building at 1730-1732 G Street and the main building of the Young Men’s Christian Association at 1736 G Street. A deed of trust made on October 17, 1805, names James Calder of Georgetown as the owner of the property and describes the house as a three-story brick house measuring 26 feet 9 inches by 36 feet 9 inches, with kitchen, stable, and carriage house, all of brick, on a lot measuring 31 feet along G Street and 113 feet deep.”4

On September 1, 1815, while the Department of State still occupied the house, Calder sold it, together with additional land extending westward to Eighteenth Street, to Tobias Lear for $8,000.5 On the same date Lear’s son, Benjamin L. Lear, bought a small lot adjoining the property on the east,6 and on November 17, 1815, Lear bought a lot adjoining his son’s lot on the east.7These purchases gave the Lears a total frontage on G Street of approximately 240 feet.

The Department of State continued to occupy this house until about April [Page 34] 1, 1816. During this time, James Monroe was Secretary of State.

On January 21, 1818, Lear’s widow and son sold the whole property on G Street to Attorney General William Wirt 8 for $12,000.9 Wirt continued as Attorney General until March 3, 1829. During that time he made this house his residence,10 and it came to be known as the “Wirt property”11 or the “Wirt Mansion.” The house had evidently been enlarged during Lear’s ownership and presumably after the Department of State had vacated it, because, although it measured less than 27 by 37 feet in 1805 and stood until 1815 on a lot only about four feet wider than the house, Wirt, who had a large family, described the house on the day he bought it as “quite comfortable,”12 and there were subsequent references to it as a “mansion.”

The house subsequently changed hands a number of times.13 It was probably still standing in 1887, because on June 8 of that year the Department of State purchased from Mathew B. Brady six prints of a photograph of it.14(These prints have not been located.)

On March 1, 1889, John R. McLean of Cincinnati, Ohio, and his wife, sold the property, together with another property just south of it on Eighteenth Street, to the Columbia Athletic Club for $45,000.15 It was presumably shortly after this sale that the old house was razed, for the Columbia Athletic Club proceeded to erect, partly on its site, a five-story brick structure with an ornate brownstone front which later was the boys’ building of the Young Men’s Christian Association.16

By 1898 the Columbia Athletic Club was in default on interest payments on its mortgage on the property, and on December 30, 1898, the property was sold at auction to the YMCA.17 The main building of the YMCA, which covers the westerly portion of the site of the old house, was erected in 1904.