The first meeting place of the Continental Congress was Carpenters' Hall in Philadelphia. 6 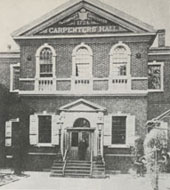 Carpenter's Hall
According to John Adams:

"At ten the delegates all met at the City [or Smith's] Tavern, and walked to the Carpenters' Hall, where they took a view of the room, and of the chamber where is an excellent library… The general cry was, that this was a good room, and the question was put, whether we were satisfied with this room? and it passed in the affirmative."7

The Journal entry briefly records that on Monday, September 5, 1774, "A number of the Delegates chosen and appointed by the Several Colonies and Provinces in North America to meet and hold a Congress at Philadelphia assembled at the Carpenters' Hall...."8

Carpenters' Hall was built in 1770 for the Carpenters' Company of Philadelphia—a society of master craftsmen patterned after the guilds of England. The two-story structure was located at the end of an alley, south from Chestnut Street, between Third and Fourth Streets. "The lower floor, consisting of one large room was occupied by the Congress, and the rooms in the second story by committees."9

Congress used Carpenters' Hall as its meeting place only for the first session, from September 5, 1774, to October 26, 1774. It was in Carpenters' Hall that the Congress first decided how the colonies should meet British threats to their freedom. Grievances were openly stated, and a policy of resistance to the British was agreed upon.

On October 26, 1774, Congress dissolved itself. However, it resolved that a Second Continental Congress should meet in Philadelphia on the "tenth of May next unless the redress of grievances, which we have desired, be obtained before that time."10

Carpenters' Hall was used for various purposes after Congress moved elsewhere.11 During the Revolutionary [Page 2]War, the lower floor was used as a hospital. Arms and equipment were stored in the basement. In 1790 the Secretary of War, Henry Knox, rented the ground floor. In 1791 it was used as the first Bank of the United States. Subsequently, it was rented by many organizations until 1856 when the Carpenters' Company decided to renovate the building, "especial care to be taken to preserve, as much as possible every feature in said Hall as it now exists indicative of its original finish." 12 It exists today as one of the historic sites in Independence National Historical Park in Philadelphia.