In 1866 the Northeast Executive Building was scheduled to be torn down to make way for the erection of the north wing of the present Treasury Department Building. On July 3, 1866, Congress authorized the Secretary of State "to hire a suitable building or buildings for the temporary accommodation of the Department of State" and appropriated $25,000 "towards defraying the expense of such hiring, the transfer of the public archives, and the fitting up of the building or buildings." 1 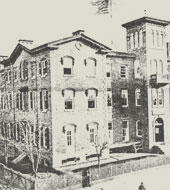 "The work of removing the archives and documents of the State Department to the Protestant Orphan Asylum building, on 14th street, which has been leased by the Government for five years, was commenced to-day, preparatory to tearing down the old State Department building to make room for the Treasury extension."

The move was also reported the following day in two other Washington newspapers.2 It has been asserted over the years that in 1866 the Department moved for a brief period to a building on the southwest corner of Thirteenth Street and Pennsylvania Avenue Northwest. This claim has been largely based on evidence found in a Washington city directory of 1866 which gives the address of the Department of State as "Penn. Avenue, corner 13th Street,"3 but the figure 13 is an error for 15. Based on the contemporary accounts records of the Department of State,4 and the contemporary newspaper accounts already referred to, it is certain that the Department moved directly from the Northeast Executive Building to the Washington City Orphan Asylum Building.

An item in the Washington Daily National Intelligencer of November 1, 1866, indicated that the Orphan Asylum Building was being completed in time for the Department of State to take possession on November 1:

"The Protestant Male and Female Orphan Asylum, on Fourteenth street, was completed and turned over to the building committee on Tuesday last [October 30] by Mr James G Naylor, the contractor for building the same, to their entire satisfaction. According to the terms of the contract the time for its completion extended to the 1st of April next; but, in order to enable the managers of the asylum to give the State Department possession on the 1st of November, by the extraordinary exertion of the contractor the building is completed, and they are now moving into it."

There also appears to be some disagreement concerning how smoothly the move was made. Frederick W. Seward, who was Assistant Secretary of State at the time, later wrote that the removal was carried out under the direction of George E. Baker, the Disbursing Clerk of the Department, and that—

"...a judicious plan prevented any lapse from order to chaos. At the close [Page 42] of business one afternoon, each bureau officer and clerk was instructed to remove the papers under his own especial charge. Workmen and carts enough for the purpose were placed at his disposal. A single night sufficed to make the transfer, though the new and old quarters were a mile apart. The next morning every official was at his post, and every paper in place, and forthcoming at call."5

The Department's contemporary accounts records suggest, however, that the moving was accomplished with somewhat less speed and efficiency than the above quotation describes. A letter written by the Disbursing Clerk on November 14, 1866, two weeks after the move began, states that "The confusion of removing the Department to a new Building has caused delay in remittance and prevented me from preparing an order...." 6

The Washington City Orphan Asylum Building was a somewhat ornate red-brick structure, of three stories and basement, and had the general appearance of an urban public school building. It was set back a few yards from the sidewalk on Fourteenth Street and also on S Street, with its main entrance on Fourteenth Street.

Both before and after the Department of State moved into this building, it made extensive alterations in the interior arrangement and in the plumbing and the gas-fittings. It also had erected a stable and a flagpole; and it expended a considerable sum of money for such items as masonry, grading, paperhanging, painting, hardware, upholstering, furniture, and carpets.7

The Department rented this building for nine years, from November 1, 1866, until October 31, 1875, at a rate of $1,250 a month, or $15,000 a year, payment being made to the treasurer of the Washington City Orphan Asylum.8 Despite the high rental, the building was not well suited to the needs of the Department, either in size or in construction. On January 27, 1869, Secretary of State William Н. Seward wrote that "the building is much too small for the necessary uses of the department."9 Also, two fires which broke out there during the Department's occupancy "came near proving disastrous." 10

It was in this makeshift building that Seward concluded his eight years less one day of service as Secretary of State (a period exceeded only by that of , 1933-1944, and 1961-196911).11 It was also here that served as Secretary of State for twelve days, the shortest term on record; and it was here that commenced on March 17, 1869, a period of service as Secretary which was to be only three days shorter than Seward's. By December 1873 Secretary Fish had a staff of thirty-seven officers, clerks, and other employees, exclusive of laborers and watchmen.12

Some years after the Department of State vacated the building, an extension eastward along S Street, in a matching style of architecture, was added. In 1927 the asylum moved to new quarters, and subsequently the building was converted to commercial purposes. The front was extended to the line of the sidewalk, so that the facade on Fourteenth Street had no resemblance to that of the original building; an extension was added southward along Fourteenth Street; and the whole enlarged structure was renamed "Merchandise Building." The building has since been razed and on the site are now townhouse apartments.

Either because of the shortage of space or because of the fire hazard in the Orphan Asylum Building, or perhaps for both reasons, the Department of State, while it occupied that building, rented a building across the street, on the southwest corner of Fourteenth and S Streets, "for the storage of Books, Maps, papers, archives, &с ." This building is described as a "three story brick house and premises." Rent at the rate of $62.50 a month covering the period from July 1, 1870, to March 31, 1875, was paid first to J.P. Klingle, later to Moses Kelley, executor, and still later to Moses Kelley and J.B. Blake, executors.13 This building has since been torn down, and its site is now occupied by a service station.