From Annapolis Congress moved to Trenton, New Jersey, where it was in session from November 1 to December 24, 1784. In Trenton Congress met in a building then known as the “French Arms Tavern,” which was located on the southwest corner of King (now Warren) and Second (now State) Streets. 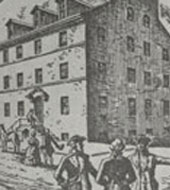 For nearly the entire time Congress was at Trenton, the papers of the Department of Foreign Affairs were under the control of the Under Secretary, Henry Remsen, Jr.1 A new Secretary for Foreign Affairs, John Jay, had been appointed in May 1784 to succeed Robert Livingston, who had resigned 11 months before, but he did not enter upon his duties until December 21, 1784.

Although no specific record has been found as to where in Trenton Remsen had his office,2 he was probably with Congress. The French Arms Tavern was a building evidently large enough to have accommodated not only the meetings of Congress and the office of its Secretary, but the Department of Foreign Affairs as well.

The building known in 1784 as the “French Arms Tavern” had been erected as a residence by John Dagworthy in the early 1730’s.3 In its day it was considered the most beautiful, and was also the largest, house in Trenton. It stood on a lot that had a frontage of 66 feet on King Street and extended back 230 feet on Second Street. Built of stone and stucco, two stories high, with a gabled roof, it consisted of a main structure 45 feet in width and 43 feet in depth (inside measurements) plus a narrower extension in the rear on the Second Street side which served as kitchen and servant’s quarters. From front to back through the middle of each story of the main structure ran a broad hallway, which contained the staircase; there were four rooms on a floor, each provided with a large fireplace; and there was a spacious room in the attic. Outside the main doorway, on King Street, was a broad landing from which two sets of eight stone steps descended in opposite directions to the sidewalk. To the rear of the house, at the end of the lot, stood a coach house and stables.

The building was owned by John Dagworthy until his death in 1756. For two years during this period, from 1740 to 1742, it was the official residence of Governor Lewis Morris. In 1760 it was sold to Samuel Henry, an iron manufacturer, who made it his residence until he leased the property to Jacob G. Bergen in 1780 for use as a tavern.

Before opening the tavern, which he named “Thirteen Stars,” Bergen made extensive changes in the building. He added a third story, with a gabled, dormer-windowed roof; converted two of the first-floor rooms into one room 20 feet in width and 43 feet in length, which became known as the “Long Room;” and set up a barroom in the basement. In 1783 the building was described as a “Dwelling-house 45 by 43 Feet, [Page 13] 3 Stories, 11 Rooms, 8 with Fire-places—a Kitchen—and Stabling for 12 Horses.”

In 1784 a commission appointed by the New Jersey Legislature leased the tavern, which was still the largest building in town, for the use of the Continental Congress. The Long Room was refurnished to serve as the assembly hall; its ceiling was whitewashed, the walls repapered, the floor recarpeted.

Congress took few actions of any significance during its stay at Trenton. A lot of time was spent in appealing to the states to send delegates, and there was some discussion on establishing a federal city. Congress and its committees continued to direct foreign affairs. Diplomatic relations were established with only two countries by this time;4 however, while at Trenton, the Congress discussed the possibility of appointing ministers to reside at London and at Madrid.5 On December 24, 1784, Congress “adjourned to meet at the city of New York, on the eleventh Day of January following...”6

Following the adjournment of Congress on December 24, 1784, Francis Witt ran the tavern under the name of the “Blazing Star” until 1789, when Henry Drake took possession and renamed it the “City Tavern.” Drake was followed by a succession of proprietors who continued the tavern under the last-mentioned name until 1837. In 1836 the property was sold to the Mechanics & Manufacturers Bank, which razed the old tavern building the following year to make way for a bank building. The site is now occupied by the New Jersey Bank.7