A New Framework for Foreign Affairs

The new Constitution of 1789 was designed to redress the shortcomings of the Articles of Confederation, and it allotted significantly more responsibility for foreign affairs to the Federal Government. Article II, Section 2 of the Constitution gave the President the power to make treaties with the “advice and consent” of the Senate. 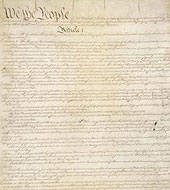 The Constitution of the United States
Practically, the clause stipulated that two-thirds of the Senators would have to approve any treaty negotiated by the Executive Branch. The President also was given the power to appoint ambassadors, ministers, and consuls, with Senate approval. But the Legislative Branch retained the power to declare war and, equally important, the power to appropriate money.

The Constitution did not give predominance in foreign affairs to the Executive Branch, although early Presidents worked to establish the precedent. Thomas Jefferson insisted, “…the President is the only channel of communication between this country and foreign nations, and it is from him alone that foreign nations or their agents are to learn what is or has been the will of the nation.” 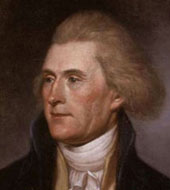 First Secretary of State under the Constitution, Thomas Jefferson

But the President could not manage foreign policy alone. On May 19, 1789, James Madison proposed the creation of a Department of Foreign Affairs under the leadership of a Secretary of State for Foreign Affairs. But, since there wasn’t thought to be enough work for a Department of “Home Affairs,” Congress also assigned domestic duties to the new Department of State. John Jay, originally appointed as Secretary of Foreign Affairs under the Articles of Confederation, continued at this post until 1790. As President, George Washington immediately appointed Thomas Jefferson, then Minister to France, to be the first Secretary of State. Jefferson began work on March 22, 1790.

Despite significant constraints on the Department of State in terms of budget and manpower, the United States achieved a remarkable number of triumphs in foreign affairs during the early years of the republic. During the 1790s, the Jay Treaty (1794) and the Pinckney Treaty (1795) regularized relations with England and Spain.