Following World War II the Department of State experienced significant growth both in functions and in personnel. Before the war there were less than 1,000 employees. After the war the number increased to over 7,000.1 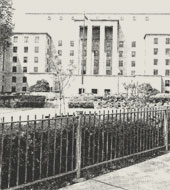 New State Building in a photograph taken in 1947.

The New War Building was erected under provisions of an act of Congress approved June 25, 1938, which made available $3,000,000 for “the acquisition of land as a site for buildings for the War Department, and for the construction of the first building unit,... within a total limit of cost of $10,815,000.”4 Subsequent acts provided additional funds.5

The site at the southwest corner of Twenty-first Street and Virginia Avenue was acquired, and in 1939 architects Gilbert S. Underwood and William Dewey Foster prepared plans for the proposed structure. The contract for general construction was awarded to the firm of John McShain, Inc., of Philadelphia, in February 1940, and construction commenced immediately following the demolition of the nine-story Boulevard Apartments located on the site. The building was completed about June 30, 1941.6

The building is a plain, sandcolored, modern structure consisting of seven stories and a basement and containing 274,000 square feet of usable space. Inscribed in modest capitals on the front, to the right of the main entrance, is the designation “Department of State” and the address “320 Twenty-first Street, N.W.”

Just inside the Twenty-first Street lobby is a 12-by 50-foot mural entitled, “Defense of America’s Free-[Page 49]doms.” It was painted in 1941 by Kindred McLeary to depict what the United States stood for in a period of crisis when the free world was threatened by totalitarianism.7 The mural was covered by draperies and by a large, full-color reproduction of the seal of the Department of State, on August 13, 1954. The Department decided that the mural, which includes a war scene, was not appropriate for a building occupied by a Department responsible for conducting the foreign relations of the United States.8 It was uncovered in early 1976.

The first unit of the Department of State moved into the New War Building—renamed “New State Building”—on January 22, 1947, the day after General George C. Marshall entered upon his duties as Secretary of State. During the following three months the War Department gradually vacated the building, and, as necessary alterations were completed, additional units of the Department of State were moved in. The moving operation continued from January until the early part of August.9

While Secretary Marshall was in Moscow, on April 19, 1947, his offices and those of his principal assistants were moved from the Old State Building to the New State Building. In the new building the Secretary’s office was a large two-story room, with private elevator, on the fifth floor overlooking the main entrance on Twenty-first Street.