On October 2, 1788, the Department of Foreign Affairs moved to another building on Broadway.1 Again, the exact location is not known for certain. According to Hunt, however, this building was a house located on the east side of the street.2 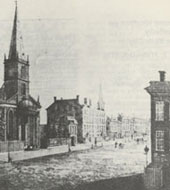 There is evidence that corroborates Hunt's statement regarding the location of this building. It is recorded that the Department, while occupying this second house on Broadway, paid office rent to one Elias "Nexen"3 (the name is variously spelled) for the period from October 2, 1788, to May 1, 1789, in the sum of L 40 New York currency.4 From February 1, 1787, or earlier, until April 30, 1788, he and Isaac Stoutenburgh, acting as attorneys for John Johnson, had collected rent from the Government for a house which was occupied as an office by the Board of Treasury.5 On May 1, 1788, the Board of Treasury moved to other quarters,6 and on the same date the New York Journal 7 carried the following advertisement:

TO BE SOLD, That pleasantly situated House and Lot of Ground NEARLY opposite Old Trinity Church-Yard, the corner of French Church-street [then better known as King Street; now Pine Street], and Broad-Way, now in the occupation of the Honorable Board of Treasury, and rents for 120 1. per annum.-For further particulars enquire of Col. Isaac Stoutenburgh, corner of Dye-street, North-River, or Elias Nexson, No. 8, Burling-slip....

Thus the house occupied until April 30, 1788, by the Board of Treasury was located on the corner of Broadway and King Street. Also, it was on the east side of Broadway, because Trinity Church and churchyard were on the west side and King Street began at Broadway and ran eastward. Perhaps Nexson failed to sell this property for the owner, or possibly he was retained as the attorney for the new owner, and perhaps it was this house that the Department of Foreign Affairs moved into in October 1788.8

It was during the period of the Department's occupancy of this second building on Broadway that the change-over took place from government under the Articles of Confederation to government under the Constitution. The new Congress convened on March 4, 1789, although there was no quorum of the House of Representatives until April 1 and no quorum of the Senate until April 6. President Washington took his oath of office on April 30. Until such time as a Department of Foreign Affairs was established under the Constitution, the former Department, with John Jay still as Secretary, continued to function.

The Department of Foreign Affairs under the Constitution was created by an act of Congress approved on July 27, 1789.9 Its name was changed less than two months later, on September 15, 1789, to the Department of State, and its functions were augmented to include certain domestic duties as well as those pertaining to foreign affairs already prescribed.10

The first Secretary of State under the Constitution was Thomas Jefferson. Although he was commissioned on September 26, 1789, he was still in France at the time, and Jay continued to perform the essential duties of the office until Jefferson entered upon his duties on March 22, 1790.

The Department of Foreign Affairs under the Articles of Confederation was a time-tested model for the new Department. Its strengths, as well as its defects, would prove invaluable in constructing the new organization.

Jay had initiated many new procedures that would be adopted by the Department of State. Among these, he had begun carefully to collect and file the Department's papers, including the official correspondence of the diplomatic representatives, both this country's as well as foreign. Jay indicated that "it is to papers in this office that future historians must recur for accurate accounts of many interesting affairs respecting the late Revolution."11

Also during this early period, some of the country's greatest diplomats had served and had achieved notable diplomatic successes. Among these great diplomats were Adams, Franklin, Jay, and Jefferson. The Treaty of 1783 had been negotiated, and the beginnings of relations with other countries were becoming firmly established.

When Jefferson took over, the Department was still in the building on Broadway. Evidently, however, its quarters in this building were smaller than its needs, because by 1790 a portion of its effects amounting to nine cartloads was stored in rooms in the New York City Нall.12

The Department occupied the second location on Broadway until October 1790 when the seat of the new government was moved to Philadelphia.15 When it moved out of this building, the Department remained responsible for payment of rent, [Image: Rounded head portrait of ?] amounting to about $150, until its year's lease expired, and it sublet the building to two tenants for the unexpired term.16 The house, which was the last home of the Department of Foreign Affairs and the first home of the Department of State, has, like other residences that formerly stood along lower Broadway, long since disappeared from the scene.