From August to November in 1797, 1798, and 1799, Secretary of State moved the Department of State to Trenton, New Jersey, because of recurring epidemics of yellow fever in Philadelphia. In 1797 the Department moved from Philadelphia to Trenton between August 31 and September 5 and returned to Philadelphia between November 2 and 8. In 1798 it moved to Trenton between August 13 and 18 and returned between November 10 and 16. In 1799 it was in Trenton from about August 29 to about November 1. 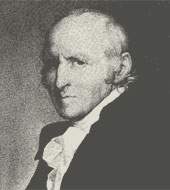 For each move, the Department's furniture, books, and papers were carted to the Philadelphia waterfront, shipped up the Delaware River to Lamberton (then just south of Trenton; now a part of that city), and then carted to Trenton. For the return trip, the process was repeated in reverse, and the Department would resume its functions in Philadelphia. While in Trenton, the Department occupied rooms in the New Jersey State House.1

This was a new building at the time, having only been completed in 1794 at a cost of 3,000. It was a plain, roughcast structure of a bluish color, measuring 100 feet across the front and 60 feet in depth, with a bow at either end. It consisted of two stories and an attic, with a gable roof and a cupola or belfry in the center of the roof. Over the years, extensive additions and improvements have been made until the original building, although embodied in the present structure, is no longer recognizable.2