On October 29, 1796, the Department of State moved again in Philadelphia to a building on North Street (known formerly also as “North Allеу” and now a part of Cuthbert Street).1 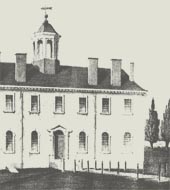 During yellow fever epidemics in Philadelphia, the Department occupied offices in the State Capitol at Trenton.
A notice in the Philadelphia Gazette of the United States mentioned the move as follows: “THE office of the secretary of state of the United States, is removed to the north side of North alley, between Market and Arch, and between Fifth and Sixth streets, third door above Fifth street.”2

No description or picture of this building has been found, and it does not seem possible now to determine just where on the north side of North Street in 1796 “the third door above Fifth-street” was located. Most likely it was a residence. Perhaps it was also of very modest proportions, for properties in the immediate vicinity ranged in valuation in 1798 between $400 and $1,600.3 All of the buildings now on the north side of this street are of more recent construction.4

[Image: During yellow fever epidemics in Philadelphia, the Department occupied offices in the State Capitol at Trenton.]