National Security Council Paper NSC-68 (entitled “United States Objectives and Programs for National Security” and frequently referred to as NSC-68) was a Top-Secret report completed by the U.S. Department of State’s Policy Planning Staff on April 7, 1950. The 58-page memorandum is among the most influential documents composed by the U.S. Government during the Cold War, and was not declassified until 1975. Its authors argued that one of the most pressing threats confronting the United States was the “hostile design” of the Soviet Union. The authors concluded that the Soviet threat would soon be greatly augmented by the addition of more weapons, including nuclear weapons, to the Soviet arsenal. They argued that the best course of action was to respond in kind with a massive build-up of the U.S. military and its weaponry. 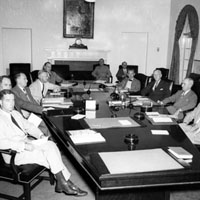 Reeling from the recent victory of Communist forces in the Chinese Civil War and the successful detonation of an atomic weapon by the Soviet Union, Secretary of State Dean Acheson asked the Policy Planning Staff, led by Paul Nitze, to undertake a comprehensive review of U.S. national security strategy. Building upon the conclusions of an earlier National Security Council paper (NSC-20/4), the authors of NSC-68 based their conclusions on the theory that the decline of the Western European powers and Japan following World War II had left the United States and the Soviet Union as the two dominant powers. Nitze’s group argued that the Soviet Union was “animated by a new fanatic faith” antithetical to that of the United States, and was driven “to impose its absolute authority over the rest of the world.” Furthermore, they concluded that “violent and non-violent” conflict between the United States and the Soviet Union had become “endemic.”

NSC-68 outlined a variety of possible courses of action, including a return to isolationism; war; continued diplomatic efforts to negotiate with the Soviets; or “the rapid building up of the political, economic, and military strength of the free world.” This last approach would allow the United States to attain sufficient strength to deter Soviet aggression. In the event that an armed conflict with the Communist bloc did arise, the United States could then successfully defend its territory and overseas interests.

The authors of NSC-68 rejected a renewal of U.S. isolationism, fearing that this would lead to the Soviet domination of Eurasia, and leave the United States marooned on the Western Hemisphere, cut off from the allies and resources it needed to fend off further Soviet encroachments. The report also ruled out a preventive strike against the Soviet Union, because its authors reckoned that such action would not destroy the Soviet military’s offensive capacities, and would instead invite retaliatory strikes that would devastate Western Europe. Moreover, U.S. experts did not believe that American public opinion would support measures that might lead to a protracted war. NSC-68 did not rule out the prospect of negotiating with the Soviet Union when it suited the objectives of the United States and its allies; however, the report’s authors argued that such an approach would only succeed if the United States could create “political and economic conditions in the free world” sufficient to deter the Soviet Union from pursuing a military solution to the Cold War rivalry.

NSC-68 concluded that the only plausible way to deter the Soviet Union was for President Harry Truman to support a massive build-up of both conventional and nuclear arms. More specifically, such a program should seek to protect the United States and its allies from Soviet land and air attacks, maintain lines of communications, and enhance the technical superiority of the United States through “an accelerated exploitation of [its] scientific potential.” In order to fund the substantial increase in military spending this conclusion demanded, the report suggested that the Government increase taxes and reduce other expenditures.

Initially, a number of U.S. officials strongly opposed NSC-68’s recommendations. Critics such as Secretary of Defense Louis Johnson, and senior diplomats such as Soviet experts and former ambassadors to the Soviet Union George Kennan and Charles Bohlen, argued that the United States already had a substantial military advantage over the Soviet Union. Kennan, in particular, disagreed with Nitze’s assertion that the Soviet Union was bent on achieving domination through force of arms, and argued that the United States could contain the Soviet Union through political and economic measures, rather than purely military ones. However, the invasion of South Korea by Soviet and Chinese-backed North Korean forces in June 1950, and continuing charges by Congressional critics that the Administration was soft on Communism, quickly settled matters in favor of the report’s recommendations. NSC 68’s recommendations thereby became policy, and the United States Government began a massive military build-up. While NSC-68 did not make any specific recommendations regarding the proposed increase in defense expenditures, the Truman Administration almost tripled defense spending as a percentage of the gross domestic product between 1950 and 1953 (from 5 to 14.2 percent).