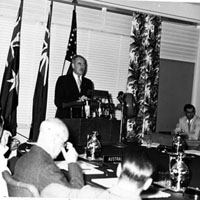 Secretary of State Dean Acheson speaking at an ANZUS Conference

At the onset of the Second World War, both Australia and New Zealand were members of the British Empire, so when Britain entered the conflict they did as well. During the course of the war, these two geographically isolated nations faced the threat of direct attack for the first time in their histories as modern states. As the Japanese expanded south into the Pacific Ocean, mainland Australia and especially the city of Darwin suffered frequent Japanese air raids in 1942 and 1943. After the sudden fall of the strategically important British colony of Singapore to the Japanese on February 15, 1942, the Antipodean nations expressed concern that the British Government was too focused on the war in Europe to protect its colonies properly and they began for the first time to look to the United States to help ensure their security.

As the other Allied powers turned their attention to the reconstruction of postwar Europe and Japan in the post World War II era, the governments of Australia and New Zealand remained concerned about the possibility of future Japanese expansionism and grew apprehensive about the rise of communism, particularly in East Asia. Even before the war ended, Australia and New Zealand signed an agreement stating that they had common goals and would work together in the international arena; at the time, the agreement was for both nations the first treaty negotiated independently, and it reflected the concern that the major powers of the United States and the United Kingdom may not take Australian and New Zealander issues into account in their postwar planning. The signing of the North Atlantic Treaty in 1949, in which the United Kingdom, Canada, and the United States alongside the Western European powers committed to a mutual defense arrangement, further prompted the geographically distant countries of Australia and New Zealand to seek their own security guarantee and means of integration in the international system in the postwar order.

Australia initially considered the idea of a regional pact in the Pacific in the 1930s, and in 1946, at a meeting of the Commonwealth Prime Ministers, it suggested that the major powers of the British Commonwealth form a regional defense system. If such an organization were created, the members could then invite the United States and other countries with strong interests in the Pacific to join. At that time, however, the United States was not yet prepared to commit itself to formal security arrangements in the Pacific. During the late 1940s, the United States was heavily engaged in the rebuilding of Japan, but the United States did not extend its defense interests far beyond Japanese territory before the Korean War. In response to Australian suggestions for a regional coalition, U.S. Secretary of State Dean Acheson stated that formal treaties with the South Pacific nations were unnecessary, as any real attack on Australia or New Zealand would elicit a U.S. response even without formal treaties in place to guarantee it. Moreover, the situations in the Atlantic and the Pacific were quite different, so there was no question of simply creating a “Pacific Treaty Organization” to parallel NATO. The Pacific Ocean was much larger, and the nations that bordered it were far more culturally and linguistically diverse than the nations of the North Atlantic. Other considerations led the United States to hesitate to commit to a regional organization in the Pacific as well. A number of the countries in Southeast Asia were still under colonial rule, or in the process of developing as independent states, and therefore neither they nor their colonial governments were in a position to make regional security commitments. At this time, the United States was also faced with the critical situation in Europe, including the occupation and support of West Germany and West Berlin and facing what it saw as the Soviet threat on that continent. There were fewer immediate economic or political threats to force equal attention to the security of the Southwest Pacific.

Several developments in Asia between 1949 and 1951 helped to change U.S. perceptions about the utility of a formal security arrangement. The communist victory in the Chinese Revolution in 1949 seemed to confirm fears that communism was spreading in East Asia as well as in Europe. In 1950s, the outbreak of the Korean War led Australia and New Zealand to commit troops through the United Nations and alongside the NATO allies, demonstrating both their concern over the threat of communism and their commitment to doing their part to help contain it in the region. Most importantly, the U.S. decision to end the occupation of Japan and seek a peace treaty was met with great suspicion and disapproval from officials in the South Pacific, and that made the United States more willing to develop a security treaty to gain Antipodean support for the final peace agreement. In April of 1951, U.S. President Harry Truman announced that negotiations on a tripartite security treaty between the United States, Australia and New Zealand would occur concurrently with the negotiations for a final peace treaty with Japan. Both treaties were concluded in mid-1951, and the ANZUS Treaty was ratified by the United States and entered into force in 1952.

Although Britain also maintained an obligation to help defend Australian and New Zealander security as the leader of the Commonwealth, it was not invited to join the agreement. There were several reasons for the omission. One important concern was that extending the invitation to Britain would have required the signatories to open the opportunity to other European powers with colonial interests in the region. Another was the fact that British forces were already engaged in Europe and the Middle East, not to mention committed to the rest of the Commonwealth, making their actual intervention in the South Pacific in the event of a security crisis unlikely. Britain was also dealing with internal instability in its Asian colonies, including Malaya and Hong Kong, and that made the United States reluctant to sign an agreement that might obligate it to step in to resolve British colonial concerns. In any case, the British were already committed to U.S. security via NATO and to Australia and New Zealand via the Commonwealth, so its participation in a Pacific security arrangement with the United States, Australia, and New Zealand would have been somewhat redundant. All parties assumed that if the ANZUS Treaty was eventually extended to include other powers, however, the United Kingdom would be among the first to join.

Although ANZUS was never expanded, the 1954 creation of the Southeast Asian Treaty Organization (SEATO) included all of the ANZUS powers, as well as Britain, France, and several other Asian powers, eliminating the impetus to change the foundation of the ANZUS Treaty. Over the course of the decades that followed the signing of the ANZUS Treaty, the members met annually to discuss their shared interests and concerns. These concerns increasingly focused on the spread of communism rather than the potential for Japanese militarization. Both Australia and New Zealand sent forces to support the U.S. effort in Vietnam, though without formally invoking the treaty.

In 1984, the ANZUS Treaty began to unravel when New Zealand declared its country a nuclear-free zone and refused to allow U.S. nuclear-powered submarines to visit its ports. Two years later, U.S. Secretary of State George P. Shultz and Australian Foreign Minister Bill Hayden concluded a series of bilateral talks by confirming that their countries would continue to honor their obligations to one another under the ANZUS Treaty, in spite of the fact that the trilateral aspects of the Treaty had been halted. On September 17, 1986, the United States suspended its treaty obligations toward New Zealand.