The Arab-Israeli War of 1948 broke out when five Arab nations invaded territory in the former Palestinian mandate immediately following the announcement of the independence of the state of Israel on May 14, 1948. In 1947, and again on May 14, 1948, the United States had offered de facto recognition of the Israeli Provisional Government, but during the war, the United States maintained an arms embargo against all belligerents. 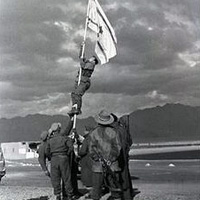 Raising the Flag signified the Conclusion of the Conflict

On November 29, 1947, the United Nations General Assembly adopted Resolution 181 (also known as the Partition Resolution) that would divide Great Britain’s former Palestinian mandate into Jewish and Arab states in May 1948. Under the resolution, the area of religious significance surrounding Jerusalem would remain under international control administered by the United Nations. The Palestinian Arabs refused to recognize this arrangement, which they regarded as favorable to the Jews and unfair to the Arab population that would remain in Jewish territory under the partition. The United States sought a middle way by supporting the United Nations resolution, but also encouraging negotiations between Arabs and Jews in the Middle East.

The United Nations resolution sparked conflict between Jewish and Arab groups within Palestine. Fighting began with attacks by irregular bands of Palestinian Arabs attached to local units of the Arab Liberation Army composed of volunteers from Palestine and neighboring Arab countries. These groups launched their attacks against Jewish cities, settlements, and armed forces. The Jewish forces were composed of the Haganah, the underground militia of the Jewish community in Palestine, and two small irregular groups, the Irgun, and LEHI. The goal of the Arabs was initially to block the Partition Resolution and to prevent the establishment of the Jewish state. The Jews, on the other hand, hoped to gain control over the territory allotted to them under the Partition Plan.

After Israel declared its independence on May 14, 1948, the fighting intensified with other Arab forces joining the Palestinian Arabs in attacking territory in the former Palestinian mandate. On the eve of May 14, the Arabs launched an air attack on Tel Aviv, which the Israelis resisted. This action was followed by the invasion of the former Palestinian mandate by Arab armies from Lebanon, Syria, Iraq, and Egypt. Saudi Arabia sent a formation that fought under the Egyptian command. British trained forces from Transjordan eventually intervened in the conflict, but only in areas that had been designated as part of the Arab state under the United Nations Partition Plan and the corpus separatum of Jerusalem. After tense early fighting, Israeli forces, now under joint command, were able to gain the offensive.

Though the United Nations brokered two cease-fires during the conflict, fighting continued into 1949. Israel and the Arab states did not reach any formal armistice agreements until February. Under separate agreements between Israel and the neighboring states of Egypt, Lebanon, Transjordan, and Syria, these bordering nations agreed to formal armistice lines. Israel gained some territory formerly granted to Palestinian Arabs under the United Nations resolution in 1947. Egypt and Jordan retained control over the Gaza Strip and the West Bank respectively. These armistice lines held until 1967. The United States did not become directly involved with the armistice negotiations, but hoped that instability in the Middle East would not interfere with the international balance of power between the Soviet Union and the United States.