As the Cold War came to dominate U.S. foreign policy, America extended security commitments to two nations in Northeast Asia—the Republic of Korea and Japan. The Department of State under Secretary Dean Acheson forged a series of agreements to build a permanent American presence in the region and support these two nations, creating alliances that have lasted to today. 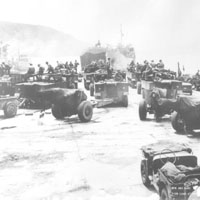 After Japan’s unconditional surrender to the Allied Powers in August 1945, the United States military occupied the defeated nation and began a series of far-reaching reforms designed to build a peaceful and democratic Japan by reducing the power of the military and breaking up the largest Japanese business conglomerates. However, growing concern over Communist power in East Asia, particularly the success of the Chinese Communist Party in its struggle against Chiang Kai-shek’s Nationalist forces, led the United States to halt reforms in 1947 and 1948 in order to focus on the economic recovery and political rehabilitation of Japan. In this “Reverse Course,” Supreme Commander of the Allied Powers, General Douglas MacArthur, focused on strengthening, not punishing, what would become a key cold war ally.

The growing concern over Japanese security related directly to war in Korea. During World War II the United States and the Soviet Union agreed to temporarily divide Korea at the 38th parallel in order to oversee the removal of Japanese forces. It soon became clear, however, that neither of the cold war antagonists would permit its Korea ally to be threatened by unification. The Soviets supported Kim Il Song in the Democratic People’s Republic of Korea in the north; the United States backed Syngman Rhee in the Republic of Korea in the south. Nevertheless the United States did not make Korea a key part of its defensive strategy for East Asia, and American forces withdrew from the south in the late 1940s. Assuming that the United States did not consider South Korea of vital interest, Kim’s army attacked the South in June 1950 almost conquering the entire peninsula. The U.S. military returned, leading a United Nations-authorized force to push the North’s army back above the 38th parallel and beyond. After the People’s Republic of China entered the war in late 1950, the Department of State worked to isolate Peking and maintain the unity of the U.S.-led coalition. Only in 1953 did the two sides reach an uneasy truce, thus crystallizing the division between North and South that exists today. In 1953 the United States and South Korea signed a mutual security treaty designed to protect this new nation from its neighbor to the north.

U.S. efforts to save South Korea from Communist invasion accelerated Department of State attempts to restore Japan to a respected international position, and make that country a prosperous ally of the United States. Negotiated primarily by John Foster Dulles in 1950 and 1951, the Treaty of San Francisco ended the state of war between Japan and 47 of the Allies (most nations allied with the Soviet Union refused to sign), concluded the American Occupation, and excused the Japanese from reparations for the war. Acheson signed the San Francisco Treaty on September 8, 1951, the same day he and Japanese Prime Minister Yoshida Shigeru signed the United States-Japanese Security Treaty. The treaty allowed the United States to station troops in Japan, and made the Japanese islands into an important facet of America’s global containment structure. To American leaders, Japan has transformed from World War II enemy to vital ally, and Korea went from a peripheral region to a key battle ground in the Cold War.