In the immediate post-World War II period, Europe remained ravaged by war and thus susceptible to exploitation by an internal and external Communist threat. In a June 5, 1947, speech to the graduating class at Harvard University, Secretary of State George C. Marshall issued a call for a comprehensive program to rebuild Europe. Fanned by the fear of Communist expansion and the rapid deterioration of European economies in the winter of 1946–1947, Congress passed the Economic Cooperation Act in March 1948 and approved funding that would eventually rise to over $12 billion for the rebuilding of Western Europe. 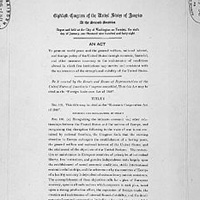 First page of the Marshall Plan

The Marshall Plan generated a resurgence of European industrialization and brought extensive investment into the region. It was also a stimulant to the U.S. economy by establishing markets for American goods. Although the participation of the Soviet Union and East European nations was an initial possibility, Soviet concern over potential U.S. economic domination of its Eastern European satellites and Stalin’s unwillingness to open up his secret society to westerners doomed the idea. Furthermore, it is unlikely that the U.S. Congress would have been willing to fund the plan as generously as it did if aid also went to Soviet Bloc Communist nations.