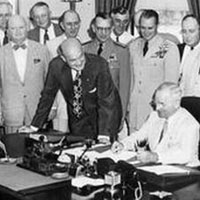 The Council itself included the President, Vice President, Secretary of State, Secretary of Defense, and other members (such as the Director of the Central Intelligence Agency), who met at the White House to discuss both long-term problems and more immediate national security crises. A small NSC staff was hired to coordinate foreign policy materials from other agencies for the President. Beginning in 1953 the President’s Assistant for National Security Affairs directed this staff. Each President has accorded the NSC with different degrees of importance and has given the NSC staff varying levels of autonomy and influence over other agencies such as the Departments of State and Defense. President Dwight D. Eisenhower, for example, used the NSC meetings to make key foreign policy decisions, while John F. Kennedy and Lyndon B. Johnson preferred to work more informally through trusted associates. Under President Richard M. Nixon, the NSC staff, then headed by Henry A. Kissinger, was transformed from a coordinating body into an organization that actively engaged in negotiations with foreign leaders and implementing the President’s decisions. The NSC meetings themselves, however, were infrequent and merely confirmed decisions already agreed upon by Nixon and Kissinger.

The act also established the Central Intelligence Agency (CIA), which grew out of World War II era Office of Strategic Services and small post-war intelligence organizations. The CIA served as the primary civilian intelligence-gathering organization in the government. Later, the Defense Intelligence Agency became the main military intelligence body. The 1947 law also caused far-reaching changes in the military establishment. The War Department and Navy Department merged into a single Department of Defense under the Secretary of Defense, who also directed the newly created Department of the Air Force. However, each of the three branches maintained their own service secretaries. In 1949 the act was amended to give the Secretary of Defense more power over the individual services and their secretaries.