On May 14, 1948, David Ben-Gurion, the head of the Jewish Agency, proclaimed the establishment of the State of Israel. U.S. President Harry S. Truman recognized the new nation on the same day. 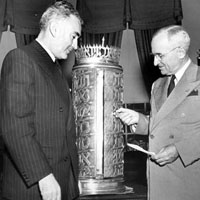 Although the United States supported the Balfour Declaration of 1917, which favored the establishment of a Jewish national home in Palestine, President Franklin D. Roosevelt had assured the Arabs in 1945 that the United States would not intervene without consulting both the Jews and the Arabs in that region. The British, who held a colonial mandate for Palestine until May 1948, opposed both the creation of a Jewish state and an Arab state in Palestine as well as unlimited immigration of Jewish refugees to the region. Great Britain wanted to preserve good relations with the Arabs to protect its vital political and economic interests in Palestine.

Soon after President Truman took office, he appointed several experts to study the Palestinian issue. In the summer of 1946, Truman established a special cabinet committee under the chairmanship of Dr. Henry F. Grady, an Assistant Secretary of State, who entered into negotiations with a parallel British committee to discuss the future of Palestine. In May 1946, Truman announced his approval of a recommendation to admit 100,000 displaced persons into Palestine and in October publicly declared his support for the creation of a Jewish state. Throughout 1947, the United Nations Special Commission on Palestine examined the Palestinian question and recommended the partition of Palestine into a Jewish and an Arab state. On November 29, 1947 the United Nations adopted Resolution 181 (also known as the Partition Resolution) that would divide Great Britain’s former Palestinian mandate into Jewish and Arab states in May 1948 when the British mandate was scheduled to end. Under the resolution, the area of religious significance surrounding Jerusalem would remain a corpus separatum under international control administered by the United Nations.

Although the United States backed Resolution 181, the U.S. Department of State recommended the creation of a United Nations trusteeship with limits on Jewish immigration and a division of Palestine into separate Jewish and Arab provinces but not states. The State Department, concerned about the possibility of an increasing Soviet role in the Arab world and the potential for restriction by Arab oil producing nations of oil supplies to the United States, advised against U.S. intervention on behalf of the Jews. Later, as the date for British departure from Palestine drew near, the Department of State grew concerned about the possibility of an all-out war in Palestine as Arab states threatened to attack almost as soon as the UN passed the partition resolution.

Despite growing conflict between Palestinian Arabs and Palestinian Jews and despite the Department of State’s endorsement of a trusteeship, Truman ultimately decided to recognize the state Israel.