On June 14, 1946, before a session of the United Nations Atomic Energy Commission (UNAEC), U.S. representative Bernard Baruch, presented a proposal for the creation of an international Atomic Development Authority. The presentation of the Baruch Plan marked the culmination of an effort to establish international oversight of the use of atomic energy in the hopes of avoiding unchecked proliferation of nuclear power in the post World War II period. 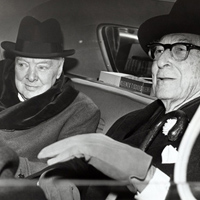 The immediate origins of this effort can be traced to the Conference of Foreign Ministers held in Moscow between December 16 and 26, 1945. There representatives from the United States, Great Britain, and the Soviet Union created a United Nations commission to advise on the destruction of all existing atomic weapons and to work toward using atomic energy for peaceful purposes. The resulting body, the UNAEC, was created on January 24, 1946, with six permanent members (the United States, Britain, France, the Soviet Union, China, and Canada) and six rotating members.

That same month, U.S. Secretary of State James Byrnes created a special advisory committee, whose members included Under-Secretary of State Dean Acheson and the Chairman of the Tennessee Valley Authority David Lilienthal, to compose a report that the U.S. Government would present to the UNAEC. The committee presented their report to Secretary Byrnes in March.

The so-called Acheson-Lilienthal report, written in large part by the committee’s chief scientific consult, Robert Oppenheimer, called for the creation of the Atomic Development Authority to oversee the mining and use of fissile materials, the operation of all nuclear facilities that could produce weaponry, and the right to dispense licenses to those countries wishing to pursue peaceful nuclear research. The plan relied on Soviet-American cooperation, since its authors recognized that the Soviet Union was unlikely to cede its veto power in the United Nations Security Council over any matter. Moreover, it made no mention of when the United States should destroy its nuclear arsenal, though it did acknowledge that doing so was a necessity.

Baruch presented a slightly different plan to the UNEAC. Under the Baruch Plan the Atomic Development Authority would oversee the development and use of atomic energy, manage any nuclear installation with the ability to produce nuclear weapons, and inspect any nuclear facility conducting research for peaceful purposes. The plan also prohibited the illegal possession of an atomic bomb, the seizure of facilities administered by the Atomic Development Authority, and punished violators who interfered with inspections. The Atomic Development Authority would answer only to the Security Council, which was charged with punishing those nations that violated the terms of the plan by imposing sanctions. Most importantly, the Baruch Plan would have stripped all members of the United Nations Security Council of their veto power concerning the issue of United Nations sanctions against nations that engaged in prohibited activities. Once the plan was fully implemented, the United States was to begin the process of destroying its nuclear arsenal.

The Soviets strongly opposed any plan that allowed the United States to retain its nuclear monopoly, not to mention international inspections of Soviet domestic nuclear facilities. The Soviets also rejected the idea of surrendering their Security Council veto over any issue as they argued that the council was already stacked in favor the United States.

By September 17, Baruch confessed to President Truman that he feared there was no possibility of reaching an agreement before the end of the year, at which point there would be a rotation of the non-permanent members of the UNAEC. Nevertheless, Baruch worried that delaying a vote until after the rotation of the members would destroy any chance of passing a resolution to create an Atomic Development Authority. As such, Baruch pushed for a formal vote before the end of the year in the hopes that, even if it did not pass, it would demonstrate the unreasonableness of the Soviet Union’s objections to a proposal that would spare the world a nuclear arms race. The vote was held on December 30, with 10 of the UNAEC’s 12 members in favor, while the other two members (the Soviet Union and Poland) abstained. The vote required unanimity to pass. As such, the Polish and Soviet abstentions thwarted the adoption of the Baruch Plan.