Occupation and Reconstruction of Japan, 1945–52

After the defeat of Japan in World War II, the United States led the Allies in the occupation and rehabilitation of the Japanese state. Between 1945 and 1952, the U.S. occupying forces, led by General Douglas A. MacArthur, enacted widespread military, political, economic, and social reforms. 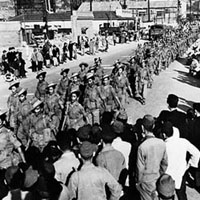 Allied Occupation in Japan after WWII

The groundwork for the Allied occupation of a defeated Japan was laid during the war. In a series of wartime conferences, the leaders of the Allied powers of Great Britain, the Soviet Union, the Republic of China, and the United States discussed how to disarm Japan, deal with its colonies (especially Korea and Taiwan), stabilize the Japanese economy, and prevent the remilitarization of the state in the future. In the Potsdam Declaration, they called for Japan’s unconditional surrender; by August of 1945, that objective had been achieved.

In September, 1945, General Douglas MacArthur took charge of the Supreme Command of Allied Powers (SCAP) and began the work of rebuilding Japan. Although Great Britain, the Soviet Union, and the Republic of China had an advisory role as part of an “Allied Council,” MacArthur had the final authority to make all decisions. The occupation of Japan can be divided into three phases: the initial effort to punish and reform Japan, the work to revive the Japanese economy, and the conclusion of a formal peace treaty and alliance.

The first phase, roughly from the end of the war in 1945 through 1947, involved the most fundamental changes for the Japanese Government and society. The Allies punished Japan for its past militarism and expansion by convening war crimes trials in Tokyo. At the same time, SCAP dismantled the Japanese Army and banned former military officers from taking roles of political leadership in the new government. In the economic field, SCAP introduced land reform, designed to benefit the majority tenant farmers and reduce the power of rich landowners, many of whom had advocated for war and supported Japanese expansionism in the 1930s. MacArthur also tried to break up the large Japanese business conglomerates, or zaibatsu, as part of the effort to transform the economy into a free market capitalist system. In 1947, Allied advisors essentially dictated a new constitution to Japan’s leaders. Some of the most profound changes in the document included downgrading the emperor’s status to that of a figurehead without political control and placing more power in the parliamentary system, promoting greater rights and privileges for women, and renouncing the right to wage war, which involved eliminating all non-defensive armed forces. 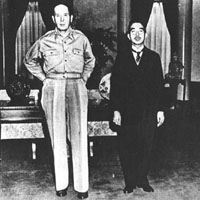 By late 1947 and early 1948, the emergence of an economic crisis in Japan alongside concerns about the spread of communism sparked a reconsideration of occupation policies. This period is sometimes called the “reverse course.” In this stage of the occupation, which lasted until 1950, the economic rehabilitation of Japan took center stage. SCAP became concerned that a weak Japanese economy would increase the influence of the domestic communist movement, and with a communist victory in China’s civil war increasingly likely, the future of East Asia appeared to be at stake. Occupation policies to address the weakening economy ranged from tax reforms to measures aimed at controlling inflation. However the most serious problem was the shortage of raw materials required to feed Japanese industries and markets for finished goods. The outbreak of the Korean War in 1950 provided SCAP with just the opportunity it needed to address this problem, prompting some occupation officials to suggest that, “Korea came along and saved us.” After the UN entered the Korean War, Japan became the principal supply depot for UN forces. The conflict also placed Japan firmly within the confines of the U.S. defense perimeter in Asia, assuring the Japanese leadership that whatever the state of its military, no real threat would be made against Japanese soil.

In the third phase of the occupation, beginning in 1950, SCAP deemed the political and economic future of Japan firmly established and set about securing a formal peace treaty to end both the war and the occupation. The U.S. perception of international threats had changed so profoundly in the years between 1945 and 1950 that the idea of a re-armed and militant Japan no longer alarmed U.S. officials; instead, the real threat appeared to be the creep of communism, particularly in Asia. The final agreement allowed the United States to maintain its bases in Okinawa and elsewhere in Japan, and the U.S. Government promised Japan a bilateral security pact. In September of 1951, fifty-two nations met in San Francisco to discuss the treaty, and ultimately, forty-nine of them signed it. Notable holdouts included the USSR, Poland and Czechoslovakia, all of which objected to the promise to support the Republic of China and not do business with the People’s Republic of China that was forced on Japan by U.S. politicians.