The first involvement of the United States in the wartime conferences between the Allied nations opposing the Axis powers actually occurred before the nation formally entered World War II. In August 1941, President Franklin Roosevelt and British Prime Minister Winston Churchill met secretly and devised an eight-point statement of war aims known as the Atlantic Charter, which included a pledge that the Allies would not accept territorial changes resulting from the war in Europe. Following the Japanese attack on Pearl Harbor, the wartime conferences focused on establishing a second front. 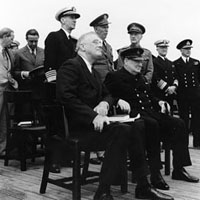 At Casablanca in January 1943, Roosevelt and Churchill agreed to fight until the Axis powers surrendered unconditionally.

In a November 1943 meeting in Egypt with Chinese leader Chiang Kai-shek, Roosevelt and Churchill agreed to a pre-eminent role for China in postwar Asia.

The next major wartime conference included Roosevelt, Churchill, and the leader of the Soviet Union, Joseph Stalin. Meeting at Tehran following the Cairo Conference, the “Big Three” secured confirmation on the launching of the cross-channel invasion and a promise from Stalin that the Soviet Union would eventually enter the war against Japan.

In 1944, conferences at Bretton Woods and Dumbarton Oaks created the framework for international cooperation in the postwar world.

In February 1945, the “Big Three” met at the former Russian czar’s summer palace in the Crimea. Yalta was the most important and by far the most controversial of the wartime meetings. Recognizing the strong position that the Soviet Army possessed on the ground, Churchill and an ailing Roosevelt agreed to a number of compromises with Stalin that allowed Soviet hegemony to remain in Poland and other Eastern European countries, granted territorial concessions to the Soviet Union, and outlined punitive measures against Germany, including an occupation and reparations in principle. Stalin did guarantee that the Soviet Union would declare war on Japan within six months.

The last meeting of the “Big Three” occurred at Potsdam in July 1945, where the tension that would erupt into the cold war was evident. Despite the end of the war in Europe and the revelation of the existence of the atomic bomb to the Allies, neither President Harry Truman, Roosevelt’s successor, nor Clement Atlee, who mid-way through the conference replaced Churchill, could come to agreement with Stalin on any but the most minor issues. The most significant agreement was the issuance of the Potsdam Declaration to Japan demanding an immediate and unconditional surrenderand threatening Japan with destruction if they did not comply. With the Axis forces defeated, the wartime alliance soon devolved into suspicion and bitterness on both sides.