Papers Relating to the Foreign Relations of the United States, For the Year 1887, Transmitted to Congress, With a Message of the President, June 26, 1888

Sir: In connection with your recent notes, relative to the claim of Don Fernando Ortiz, that his ranch lies within the Mexican and not within American jurisdiction, I have now the honor to apprise you that, in deference to the expressed wishes of the Government of Mexico, the United States authorities in Arizona Territory have been directed to suspend all further action in the matter of the survey of the realty in question, and ail proceedings there under, pending a definite relocation of the boundary line pursuant to the treaty of July 29, 1882, between the United States and Mexico.

I deem it proper to state, however, that by a dispatch No. 72, of the 12th ultimo, the consul of the United States at Paso del Norte reports that he is credibly informed that the Mexican authorities—presumably those of the State of Sonora, whence arose the original complaint—have abandoned all claim to the territory “on which was located a Mexican custom-house, as also the Ortiz ranch in Arizona.”

Mr. Brigham intimates that, should his information be unfounded, he will advise the Department to the contrary. Meanwhile I beg that you will have the kindness to ascertain the truth of the statement and inform me accordingly.

I can not close this note, since the Government of Mexico can not possibly be less concerned than the United States in obtaining all reliable data bearing upon the disputed question, without transmitting for your own and Mr. Mariscal’s information a copy of a letter from the governor of Arizona, dated the 26th ultimo, with its accompaniments, one of which, you will perceive, is a sworn statement by George James Roskruge, a United States deputy land surveyor for the district of Arizona, and who made the survey of the lands within, the disputed belt. Without wishing for the present to alter the situation, as previously stated, in advance of a formal and final relocation of the boundary line, unless Mexico should voluntarily renounce her claim to jurisdiction over the Ortiz ranch, or intending to reflect upon the character of the information furnished the National Government of Mexico, I can do no less in justice to both Governments than submit for your perusal and action a copy of Mr. Roskruge’s sworn statement, which details the circumstances of the complaint and places it in an entirely different aspect, particularly as regards several of its material allegations.

Sir: I have the honor to inclose herein for your consideration a letter from the United States surveyor-general, district of Arizona, and sworn statement of United States Deputy Land Surveyor Roskrnge, relative to the case of Don Fernando Ortiz. Also to acknowledge receipt of your letter of the 1.6th instant, respecting the same, and to state my information is that Mr. Ortiz’ arrest was based upon an indictment found by the United States grand jury at Tucson.

Sir: I have the honor to acknowledge the receipt of your letter, with documents inclosed, of the 16th instant. I have endeavored to comply with your request. Immediately on the receipt of the same I requested Surveyor Roskruge to prepare a paper setting forth all the facts in detail in regard to the controversy respecting his survey in connection with the international line between the United States and Mexico, which is herewith inclosed.

I thought it best that you be fully posted as to the facts, in order that the Hon. Secretary of State may have reliable information in connection with this controversy.

George James Roskruge, being duly sworn, upon oath deposes and says the following are the facts connected with the location of the ranch of Fernando Ortiz in the United States.

I am a United States deputy land surveyor for the district of Arizona. On the 16th day of June, 1888, I entered into a contract with John Hise, United States surveyor-general of Arizona, for the surveys of townships located in the southern portion of Pima County, Ariz., including township No. 22 south, range No. 8, east of the Gila and Salt River meridians; said contract known as contract No. 2, and duly approved by the honorable Commissioner of the General Land Office.

The custom-house officers made ample apology, and gave me a pass for 15 days. I left the custom-house and went on with my survey, and whilst placing the closing corner to sections 29 and 30 on the national boundary line, word was brought to me that I was wanted up at the custom-house. I, with my men, went to the place, and on our approach, Ortiz came towards me and spoke to me in Spanish, a language he well knew I spoke very little of. I told him to come to my wagon-driver, who was then in front of the custom-house and who spoke Spanish, when Ortiz, who speaks good English, said, “This is my land; you must have higher authority before you can survey it. I object to your making any survey of this land,” or words to that effect. I immediately asked if that was what he had sent for me for, and it appearing to me to be so absurd that it caused me to laugh outright. So I bid (?) him good-day, turned on my heel and walked to my camp. On my return to camp I found there the captain of the guard, who had come to inform me that from the customhouse officers I had nothing to fear; having their pass, I could go where I pleased, but from Ortiz I might expect trouble. I informed him through my interpreter that I was entirely satisfied with the conduct of the officers towards me, and he could inform Ortiz that if he attempted in any way to interfere with my survey that I should have him arrested by the United States marshal. From the information thus received, fearing that Ortiz might give me trouble, there being no protecting authorities nearer than Tucson, a distance of 60 miles, I procured rifles from Mr. Aguirre, and armed a portion of my assistants, and without any further trouble or delay I completed the survey of said townships, 22 south, range 8 east, placing closing corner-monuments along the international boundary line.

I have read the letter from Hon. M. Romero to Hon. Thomas Francis Bayard, dated March 26, 1887. In the letter mention is made of my having “raised a flag to the south of the Sásabe custom-house.” In answer I will state that the flags were little red and white flags ordinarily used by surveyors as sight or guide flags, one being [Page 879] carried by my flagman, and the other on a short pole on my wagon, the better to enable us to see it in brushy or wooded country.

Again, it is written:

“On being asked the object of his mission, he replied that he was going to survey some land by order of the authorities of Arizona.”

In answer to the above, I will state that I informed the custom-house officers that I was a United States deputy land surveyor, surveying United States land, acting under instructions from the Commissioner of the General Land Office.

In answer to the above, I will say, that the only map Ortiz ever attempted to show me was the general map of Mexico that was hanging on the wall of the office at the custom-house; and on this map I failed to see either the location of the Ortiz ranch and custom-house, or of any of the boundary monuments, and the guide so kindly said to be furnished me by the custom-house and for the use of whom I was to pay $10 and he to get 75 cents, was the Papago Indian who was to take me 50 miles into a desert country to show me a wrong monument, as he said, to cheat me. The guide was honest, any way, and some one failed to get $9.25.

Mention is made in the letter of the land being surveyed according to the laws of Mexico, and title issuing to Ortiz. Of this fact I received no information either at the custom-house or elsewhere, until I saw it mentioned in the above letter, and if it is so surveyed, the Mexican surveyor must certainly have forgotten all about the national boundary line when he ran his line into the United States.

“According to information furnished by the collector of customs at Sásabe, the common council of Tucson, with the approval of the governor of Arizona Territory, and basing its action on the survey made by Mr. Roskruge, instructed Mariano Samaniego, the official assessor of that Territory, to call at Ortiz ranch for the purpose of assessing it for taxation.”

With all due respect to the writer of the above, to me, rather curious paragraph, I will state that Mr. Samaniego is the assessor of Pima County, and that neither the common council of Tucson nor the governor of the Territory of Arizona has anything whatever to do with his duties as such assessor.

That I have correctly closed my surveys on the international boundary line as surveyed by the joint commission of Mexico and the United States and approved by the Governments of both countries, is beyond the question of a doubt.

That the ranch house and outbuildings of Fernando Ortiz are in section 19 of township 22 south, of range 8 east, Gila and Salt River meridian, is also beyond the question of a doubt.

When the civil engineers, Messrs. Sidney R. De Long and Lorenzo D. Chilson, were making the preliminary survey for a railroad from Tucson, Ariz., to Port Lobos, on the Gulf of California, in the State of Sonora, they retraced the national boundary line from the Parjarito Mountains to the Poso Verde Mountains, and in doing so left the Ortiz ranch-house and outbuildings in the Territory of Arizona, and on coming to the main road from Tucson to Altar they planted a post by the side of the road, thus marking the boundary line at that point. This post, I am credibly informed, was shortly afterwards removed.

The custom-house was originally located at Sásabe, a point on the main road from Altar to Tucson, and about 5 miles south of the national boundary line, but was, in the month of November, 1886, moved to the ranch of Fernando Ortiz.

Mr. Aguirre and others whom I met in the neighborhood, both Mexican and American, knew that the Ortiz ranch was in the United States, and could also point out to me the monuments on the national boundary line.

I found the country in the valley between Poso Verde and the Sierra de Sonora well marked with small monuments, some with posts, others again with ocotillo sticks having rags on them, and in one or two instances the trees were blazed, the whole line showing conclusive evidence of having been run and marked by some person or persons using an instrument and understanding their business. 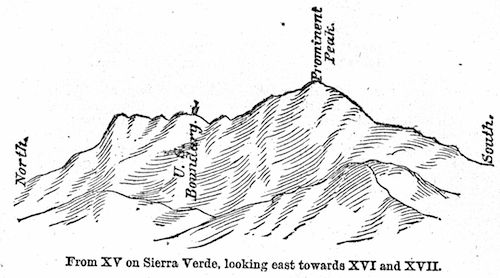 If Mr. Fernando Ortiz had made a correct interpretation on my first visit to the custom-house, I no doubt would have received the pass so courteously offered by the custom-house officers, and thus have suffered no delay or annoyance in the prosecution of my work, and had it not been for the kindly intervention of Mr. Pedro Aguirre and the gentlemanly conduct of the officers at the custom-house a very serious misunderstanding might have arisen between two friendly nations through the false interpretation of Mr. Ortiz.