Between 1921 and 1922, the world’s largest naval powers gathered in Washington, D.C. for a conference to discuss naval disarmament and ways to relieve growing tensions in East Asia.

In the wake of World War I, leaders in the international community sought to prevent the possibility of another war. Rising Japanese militarism and an international arms race heightened these concerns. As a result, policymakers worked to reduce the rising threat. Senator William E. Borah (R–Idaho) led a congressional effort to demand that the United States engage its two principal competitors in the naval arms race, Japan and the United Kingdom, in negotiations for disarmament. 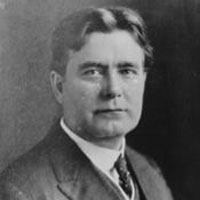 In 1921, U.S. Secretary of State invited nine nations to Washington, D.C. to discuss naval reductions and the situation in the Far East. The United Kingdom, Japan, France and Italy were invited to take part in talks on reducing naval capacity, while Belgium, China, Portugal, and the Netherlands were invited to join in discussions on the situation in the Far East. Three major treaties emerged out of the Washington Naval Conference: the Five-Power Treaty, the Four-Power Treaty, and the Nine-Power Treaty.

The Five-Power Treaty, signed by the United States, the United Kingdom, Japan, France and Italy was the cornerstone of the naval disarmament program. It called for each of the countries involved to maintain a set ratio of warship tonnage which allowed the United States and the United Kingdom 500,000 tons, Japan 300,000 tons, and France and Italy each 175,000 tons. Japan preferred that tonnage be allotted at a 10:10:7 ratio, while the U.S. Navy preferred a 10:10:5 ratio. The conference ultimately adopted the 5:5:3 ratio limits. Since the United States and the United Kingdom maintained navies in both the Pacific and Atlantic Oceans to support their colonial territories, the Five-Power Treaty allotted both countries the highest tonnage allowances. The treaty also called on all five signatories to stop building capital ships and reduce the size of their navies by scrapping older ships.

Though the treaty was widely regarded as a success, the inclusion of Article XIX, which recognized the status quo of U.S., British, and Japanese bases in the Pacific but outlawed their expansion, created a controversy amongst U.S. policymakers. Many members of the U.S. Navy in particular worried that limiting the expansion of fortifications in the Pacific would endanger U.S. holdings in Hawaii, Guam, and the Philippines.

Additionally, although the Five-Power Treaty controlled tonnage of each navy’s warships, some classes of ships were left unrestricted. As a result, a new race to build cruiser ships emerged after 1922, leading the five nations to return to the negotiating table in 1927 and 1930 in an effort to close the remaining loopholes in the Treaty.

In the Four-Power Treaty, the United States, France, the United Kingdom, and Japan agreed to consult with each other in the event of a future crisis in East Asia before taking action. This treaty replaced the Anglo-Japanese Treaty of 1902, which had been a source of some concern for the United States. In the years following World War I, U.S. policymakers saw Japan as the greatest rising military threat. Heavily militarized and looking to expand its influence and territory, Japan had the potential to threaten U.S. colonial possessions in Asia and the profitable China trade. Because of the 1902 agreement between the United Kingdom and Japan, however, if the United States and Japan entered into a conflict, the United Kingdom might be obligated to join Japan against the United States. By ending that treaty and creating a Four-Power agreement, the countries involved ensured that none would be obligated to engage in a conflict, but a mechanism would exist for discussions if one emerged.

The final multilateral agreement made at the Washington Naval Conference, the Nine-Power Treaty, marked the internationalization of the U.S. Open Door Policy in China. The treaty promised that each of the signatories—the United States, the United Kingdom, Japan, France, Italy, Belgium, the Netherlands, Portugal, and China—would respect the territorial integrity of China. The treaty recognized Japanese dominance in Manchuria but otherwise affirmed the importance of equal opportunity for all nations doing business in the country. For its part, China agreed not to discriminate against any country seeking to do business there. Like the Four-Power Treaty, this treaty on China called for further consultations amongst the signatories in the event of a violation. As a result, it lacked a method of enforcement to ensure that all powers abided by its terms.

In addition to the multilateral agreements, the participants completed several bilateral treaties at the conference. Japan and China signed a bilateral agreement, the Shangtung (Shandong) Treaty, which returned control of that province and its railroad to China. Japan had taken control of the area from the Germans during World War I and maintained control of it over the years that followed. The combination of the Shangtung Treaty and the Nine-Power Treaty was meant to reassure China that its territory would not be further compromised by Japanese expansion. Additionally, Japan agreed to withdraw its troops from Siberia and the United States and Japan formally agreed to equal access to cable and radio facilities on the Japanese-controlled island of Yap.

Together, the treaties signed at the Washington Naval Conference served to uphold the status quo in the Pacific: they recognized existing interests and did not make fundamental changes to them. At the same time, the United States secured agreements that reinforced its existing policy in the Pacific, including the Open Door Policy in China and the protection of the Philippines, while limiting the scope of Japanese imperial expansion as much as possible.