The Mukden Incident of 1931 and the Stimson Doctrine

In 1931, a dispute near the Chinese city of Mukden (Shenyang) precipitated events that led to the Japanese conquest of Manchuria. In response, U.S. Secretary of State Henry Stimson issued what would become known as the Stimson Doctrine, stating that the United States would not recognize any agreements between the Japanese and Chinese that limited free commercial intercourse in the region. 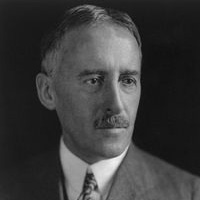 In the 1930s, events transpired that challenged all of these policies. On September 18, 1931, an explosion destroyed a section of railway track near the city of Mukden. The Japanese, who owned the railway, blamed Chinese nationalists for the incident and used the opportunity to retaliate and invade Manchuria. However, others speculated that the bomb may have been planted by mid-level officers in the Japanese Army to provide a pretext for the subsequent military action. Within a few short months, the Japanese Army had overrun the region, having encountered next to no resistance from an untrained Chinese Army, and it went about consolidating its control on the resource-rich area. The Japanese declared the area to be the new autonomous state of Manchukuo, though the new nation was in fact under the control of the local Japanese Army.

Japanese Soldiers during the Mukden Incident

The United States and other western powers were at a loss on how to respond to the rapidly developing crisis. Even as the Japanese moved far from the original site of the “attack” at Mukden to bomb the city of Jinzhou (Chinchow), there was little sense that U.S. interests in the area were anywhere near profound enough to make military intervention necessary or desirable. Given the 1930s worldwide depression, there was little support for economic sanctions to punish the Japanese. Instead, the United States sat in on League of Nations council meetings for the first time to try to convince the League to enforce the Kellogg-Briand Pact, which both Japan and China had signed. Appeals based on the pact, however, proved ineffective.

This doctrine of non-recognition proved incredibly ineffectual in the face of on-going Japanese aggression and expansion. Japan had been expanding its influence in Manchuria for years, and now it formally controlled the territory. Moreover, after its successful conquest of Manchuria, the Japanese attacked the city of Shanghai in 1932. As Shanghai was home to the largest international settlements in China, the sudden invasion threatened foreign concessions as well. Stimson responded to this development by declaring that as a result of Japanese violation of the Nine Power Treaty, the United States would no longer consider itself bound by the naval limitations agreements. This meant a potential new naval arms race in the Pacific that would inevitably draw in the Japanese, but it did not change the situation in Manchuria.

While the United States sought its own solution, it also sent an unofficial delegate along with the League of Nations group investigating the incident. The resulting report, written by the Lytton Commission, divided blame for the conflict in Manchuria equally between Chinese nationalism and Japanese militarism. Still, the report stated that it would not recognize the new state of Manchukuo on the grounds that its establishment violated the territorial integrity of China, and therefore the Nine-Power Treaty to which many of the prominent league members subscribed. When the Lytton Report was ratified by the League in 1933, the Japanese delegation walked out and never returned to the League Council. The Chinese and Japanese signed a truce, but that agreement left the Japanese firmly in control of Manchuria.

The Manchurian Crisis of 1931–33 demonstrated the futility of the 1920s-era agreements on peace, nonaggression and disarmament in the face of a power determined to march forward. Responses like the Stimson Doctrine of non-recognition similarly had little effect. In the years following the crisis, changing alliances, economic necessities and altered policies would result in an all-out Sino-Japanese War.