The Kellogg-Briand Pact was an agreement to outlaw war signed on August 27, 1928. Sometimes called the Pact of Paris for the city in which it was signed, the pact was one of many international efforts to prevent another World War, but it had little effect in stopping the rising militarism of the 1930s or preventing World War II. 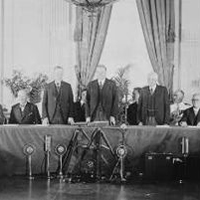 In the wake of World War I, U.S. officials and private citizens made significant efforts to guarantee that the nation would not be drawn into another war. Some focused on disarmament, such as the series of naval conferences that began in Washington in 1921, and some focused on cooperation with the League of Nations and the newly formed World Court. Others initiated a movement to try to outlaw war outright. Peace advocates Nicholas Murray Butler and James T. Shotwell were part of this movement. Both men were affiliated with the Carnegie Endowment for International Peace, an organization dedicated to promoting internationalism that was established in 1910 by leading American industrialist Andrew Carnegie.

With the influence and assistance of Shotwell and Butler, French Minister of Foreign Affairs Aristide Briand proposed a peace pact as a bilateral agreement between the United States and France to outlaw war between them. Particularly hard hit by World War I, France faced continuing insecurity from its German neighbor and sought alliances to shore up its defenses. Briand published an open letter in April of 1927 containing the proposal. Though the suggestion had the enthusiastic support of some members of the American peace movement, U.S. President Calvin Coolidge and Secretary of State Frank B. Kellogg were less eager than Briand to enter into a bilateral arrangement. They worried that the agreement against war could be interpreted as a bilateral alliance and require the United States to intervene if France was ever threatened. To avoid this, they suggested that the two nations take the lead in inviting all nations to join them in outlawing war. 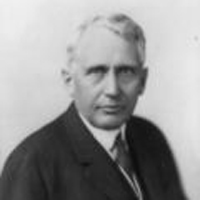 Secretary of State Frank B. Kellogg

The extension of the pact to include other nations was well-received internationally. After the severe losses of the First World War, the idea of declaring war to be illegal was immensely popular in international public opinion. Because the language of the pact established the important point that only wars of aggression – not military acts of self-defense – would be covered under the pact, many nations had no objections to signing it. If the pact served to limit conflicts, then everyone would benefit; if it did not, there were no legal consequences. In early 1928, negotiations over the agreement expanded to include all of the initial signatories. In the final version of the pact, they agreed upon two clauses: the first outlawed war as an instrument of national policy and the second called upon signatories to settle their disputes by peaceful means.

On August 27, 1928, fifteen nations signed the pact at Paris. Signatories included France, the United States, the United Kingdom, Ireland, Canada, Australia, New Zealand, South Africa, India, Belgium, Poland, Czechoslovakia, Germany, Italy and Japan. Later, an additional forty-seven nations followed suit, so the pact was eventually signed by most of the established nations in the world. The U.S. Senate ratified the agreement by a vote of 85–1, though it did so only after making reservations to note that U.S. participation did not limit its right to self-defense or require it to act against signatories breaking the agreement.

The first major test of the pact came just a few years later in 1931, when the Mukden Incident led to the Japanese invasion of Manchuria. Though Japan had signed the pact, the combination of the worldwide depression and a limited desire to go to war to preserve China prevented the League of Nations or the United States from taking any action to enforce it. Further threats to the Peace Agreement also came from fellow signatories Germany, Austria and Italy. It soon became clear that there was no way to enforce the pact or sanction those who broke it; it also never fully defined what constituted “self-defense,” so there were many ways around its terms. In the end, the Kellogg-Briand Pact did little to prevent World War II or any of the conflicts that followed. Its legacy remains as a statement of the idealism expressed by advocates for peace in the interwar period. Frank Kellogg earned the Nobel Peace Prize in 1929 for his work on the Peace Pact.