Biographies of the Secretaries of State: Charles Evans Hughes (1862–1948) 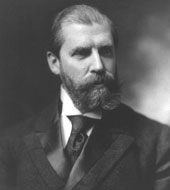 Hughes was born in Glen Falls, New York in 1862. That same year his family moved to New York City, where he was raised and attended school. He graduated from Brown University at the age of nineteen, with the second highest honors.

Hughes was a prominent public figure long before becoming Secretary of State. He had been a noted anti-corruption attorney in New York before being elected Governor of that state in 1906. He was then appointed to the Supreme Court by President William Howard Taft, a position from which he resigned in the summer of 1916 to run for President against incumbent Woodrow Wilson as the candidate of the Republican Party.

After losing the 1916 presidential election, Hughes re-entered public life as President Warren G. Harding’s choice as Secretary of State. After Harding’s death and Calvin Coolidge’s election, Hughes resigned from the post in favor of Frank B. Kellogg, but continued to lead a productive public life. Among his other projects, he served on the Permanent Court of International Justice at The Hague from 1928 until 1930. Newly elected President Herbert Hoover reappointed Hughes to the Supreme Court in 1930 as Chief Justice. Hughes served on the Court until 1941. He died in 1948.

Hughes came to the office of Secretary of State at a moment of transition in U.S. politics. President Wilson’s internationalist ideas, grounded in his wartime Fourteen Points and his advocacy of a new League of Nations designed to prevent future wars, had been discredited in the United States during the peace negotiations at the end of World War I. Although President Wilson had successfully negotiated the Treaty of Versailles, ending the war and establishing the League, the U.S. Senate had refused to ratify the treaty in 1920, and President Wilson had been unwilling to compromise in order to secure its passage.

President Harding was elected in part because of his call for a return to “normalcy,” and as a result Hughes implemented a foreign policy that pursued only the most limited connection to the League or the principles of collective security laid out during the Wilson administration.

Hughes increased U.S. prestige in Latin America by arbitrating disputes between countries in the Western Hemisphere, and during his tenure, the United States recognized the new government in Mexico and compensated Colombia for the 1903 Panamanian revolt, which the United States had supported. He also directed the Washington Naval Conference of 1921-22, which resulted in the Five-Power Treaty, setting the ratio of naval strength among the five largest naval powers.

At the same time, he signed several agreements with the Japanese limiting the deployments of Japanese and U.S. military forces in the Pacific Ocean. He also ended the state of war with Germany with the Treaty of Berlin.

As Secretary of State, Hughes also worked to improve morale and increase the level of talent in the Department of State by supporting the 1924 Foreign Service Act (“Rogers Act,”), which would eventually result in a professional, highly-trained Foreign Service.