Disillusionment with World War I, international commitments that could lead to another war, and economic uncertainty discouraged ambitious U.S. involvement in global affairs during the interwar period. 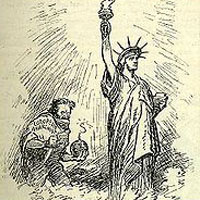 The United States, however, did not retreat into complete isolation. The necessities of commercial growth dictated continued government support for overseas private investment. That, in turn, drove the United States to further engage with both with Latin America and the rebuilding of Europe in the 1920s. The United States also played important roles in both international negotiations to set arms limitations and the creation of pacts that aimed at securing a lasting peace. By the mid-1920s, however, a general feeling of economic uncertainty reinforced isolationist tendencies and encouraged new legislation that placed severe limits on immigration to the United States, particularly from Asia. During the 1930s, the rise of fascism as a threat to international peace sparked concern in the United States, but the Great Depression curtailed U.S. willingness to act. In this environment, keeping the nation out of the brewing tension in Europe and Asia became an important foreign policy goal.