The Soviet Union has undertaken to provide Fidel Castro with the arms and assistance he needs to field an effective army, backed up by a modern air defense system and a versatile coastal defense navy. As a result, the Cuban armed forces have a higher level of combat capability now than ever before. In particular, their ability to maintain internal security has been increased. Castro has taken precautions to attempt to assure the political reliability of the officer corps, even at the expense of military proficiency. Despite the improvements, several weaknesses in the Cuban armed forces remain.

Soviet Aid Since the Crisis

Since the Soviet missiles and bombers were withdrawn from Cuba last year, the USSR has transferred to Cuban control all remaining Soviet weapons except the surface-to-air missiles and possibly the [Typeset Page 1862] coastal-defense cruise missiles and FROG tactical rockets. By mid-1964, Cubans will probably have the ability to operate all of these weapon systems.

Soviet military supplies and equipment continue to arrive, although in greatly reduced quantities since October 1962. Only nine full shiploads of military matériel have arrived this year, as compared with over [illegible in the original] such shipments during the three-month military build-up in mid-1962. Other ships have delivered a large number of trucks, some military equipment, six motor torpedo boats, and several helicopters. Many Soviet military advisers and technicians remain to train Cuban troops and to oversee the use and maintenance of Soviet equipment still on the island.

Until mid-1960, arms and equipment on hand for use by the Cuban Army ranged from weapons of Spanish-American War vintage to those of the World War II period. The older weapons and vehicles were for the most part in poor condition and badly maintained. There was a critical shortage of heavy weapons and artillery. Many of the US-supplied armored vehicles were useless for want of parts. Communications equipment was inadequate, and there were too few trained communications personnel for large-scale field operations.

In mid-1960, Soviet military equipment and training cadres began arriving in Cuba. Since then, the Cuban Army—[Facsimile Page 3]traditionally the favored branch of the armed forces—has been extensively reorganized and reequipped. Under Soviet guidance, Castro’s undisciplined and poorly trained “revolutionary” forces have been welded into a well-equipped and better trained regular army along the Soviet model.

In line with Soviet practice, counterintelligence and internal security functions—formerly under the military—were transferred to the Department of State Security under the Ministry of the Interior. The use of political officers was instituted in the army. By late 1961, the six army districts had been reorganized into three geographic commands.

Since mid-1961, the revolutionary militia has been largely disbanded. Much of it has been absorbed into active duty units or transferred to the ready reserve. The remainder serves as a home-guard People’s Defense Force upon which to draw in time of emergency. In mid-1962, the expanding anti-insurgent (LCB) forces were reorganized.

Still more recently, three-year compulsory military service was instituted for all males between the ages of 17 and 45. Under this program, some 80,000 men could be inducted into the armed services in the next three years. Many provisions of the new draft law were taken directly from similar laws in bloc countries.

In addition to Soviet technical and advisory assistance, the Cuban Army has received large quantities of Soviet military matériel including 600 to 700 T–34 and T–54/55 tanks and self-propelled guns, 1,000 artillery pieces, 700 antiaircraft guns, and some 20,000 military vehicles. As many as 30 FROG tactical rockets with a range of 25 miles, and about the same number of Snapper wire-guided antitank rocket launchers were delivered to Cuba during the military build-up last year. All these weapons, with the possible exception of the FROGs, have been transferred to Cuban control. The FROGs have been moved from Artemisa and Remedios to the Santiago de Las Vegas armored camp near Havana, probably for Cuban unit training or possibly for shipment to the USSR. 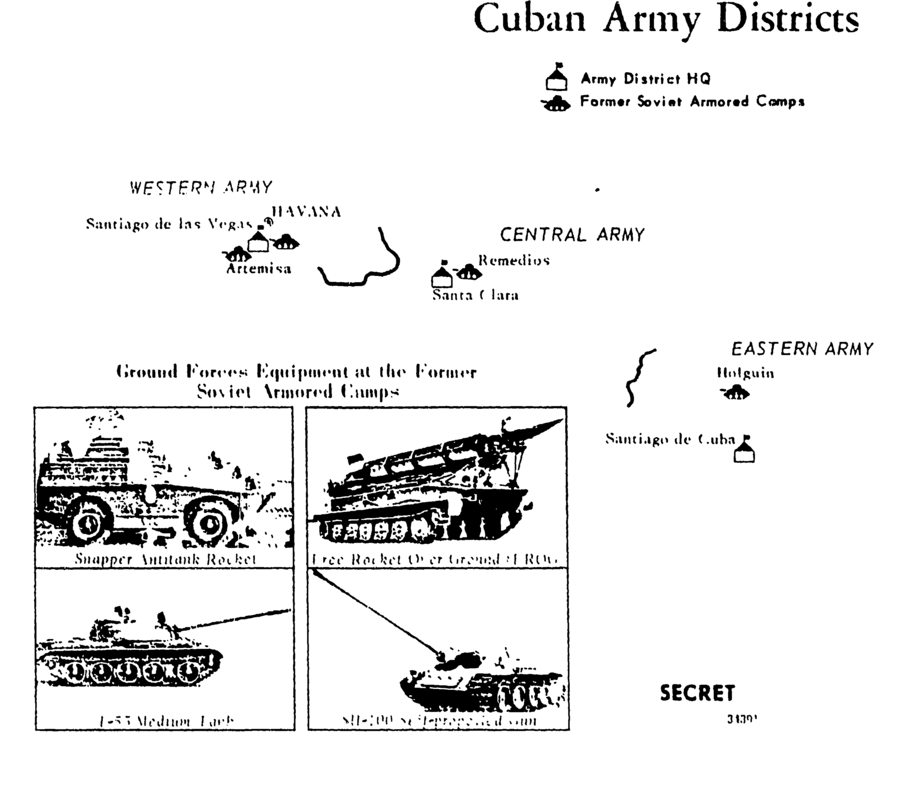 The four Soviet armored camps have also been transferred to the Cubans and most Soviet ground forces personnel have been withdrawn from the island. Those remaining are involved in training Cuban units [Typeset Page 1864] in tactical operations and in the use and maintenance of Soviet equipment turned over to the Cubans.

The over-all capability of the standing army and ready reserve has been enhanced by new equipment, extensive training, and mobilization experience. Cuban ground forces appear well able to control internal resistance, and, as they assimilate the Soviet arms and training, their ability to defend against large-scale invasion will increase. [Facsimile Page 5] The capabilities of the Cuban forces are still limited by lack of training and experience in combined operations, however, and their capability for sustained field operations remains limited by a general lack of organic transport and logistic support.

Prior to 1961, Cuban air forces used a variety of obsolete US fighters, bombers, and transport aircraft. Soviet guidance and matériel assistance have greatly increased the size and potential of the Cuban Revolutionary Air Force. A number of Cuban pilots began training in the bloc in late 1960. By mid-1961 the first MIG jet fighters had been delivered to Cuba. Since then, over 100 MIG aircraft and some 100 helicopters have been shipped from the USSR.

In March 1963, the Soviets began training Cuban pilots to fly the high-performance MIG–21 (Fishbed) jet fighter. Sometime last summer the MIG–21s were apparently turned over to Cuban control. Most Soviet pilots were probably withdrawn from the island at that time. More pilots are reportedly being trained both in Cuba and in the bloc.

Both the Soviet-supplied helicopters and MIG jet fighters have participated in missions against antigovernment forces with increasing frequency in the past few months. The MIGs have been participating in actual search and attack missions. The Cubans have used the helicopters in anti-insurgent operations throughout the island. The helicopters also have been noted operating with patrol craft in search of raiders and defectors.

The surface-to-air missile (SAM) system—the only air defense element in Cuba with an all-weather capability—remains under Soviet control. In November, however, after completing classroom training in SAM operations, a large number of Cubans began field training at individual SAM sites. By mid-1964, the Cubans probably will be able to operate the entire air defense system, including the present 24-site SAM system, with only technical and logistic assistance from the USSR.

The SAM and air defense systems are being reorganized as Cuban training in the systems progresses. Nine SAM sites have been relocated since September to provide better defense of major cities and installations—especially Havana, which now is ringed by five sites. In the process, the more modern SAM guidance radar originally brought in for [Typeset Page 1865] Soviet use was replaced by older equipment, probably in anticipation of a transfer of the system to the Cubans. Some early-warning-radar sites have also been relocated. 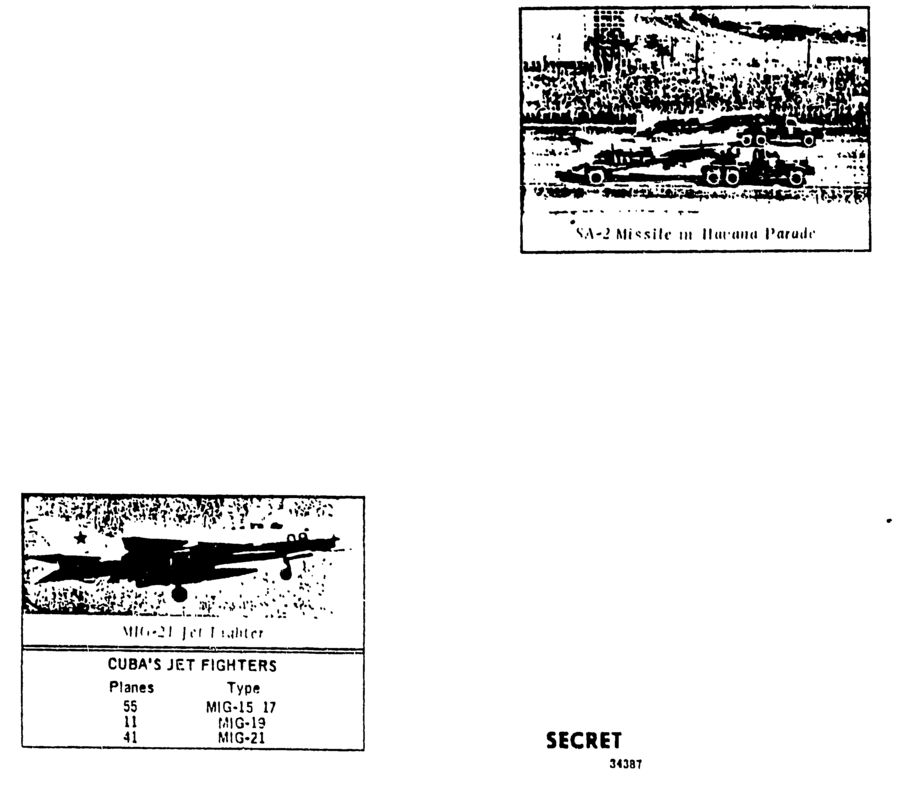 Although Cuban air defense capabilities have been increasing rapidly in the last few months, the complexity of electronic and other equipment in the air defense system will require a continuing dependence on Soviet technical and matériel assistance. The Cuban air defense forces will probably need a relatively greater number of Soviet technicians for a longer period of time than either the Cuban ground or naval forces.

The Cuban Navy was almost entirely disbanded in August 1960 as the result of purges in the wake of anti-Castro plotting. At that time it consisted [Facsimile Page 7] of only five US-made World War II patrol escorts and numerous small craft. By late 1961, however, several hundred Cuban naval personnel had begun training in the USSR, and in January 1962 the first Soviet naval vessels were delivered to Cuba. By the end of that year, 6 Kronshtadt-class subchasers, 16 P–6 motor torpedo boats, 12 Komar-class guided missile patrol boats, and several small craft had been delivered. In June 1963, after Castro’s trip to the USSR, 6 fast P–4 motor torpedo boats were shipped to Cuba to bolster the navy’s capability against maritime raiders.

The number of vessels is still inadequate for protecting the more than 3,000 miles of Cuban coastline and more Soviet ships are scheduled for delivery in the near future.

With the exception of the Komar boats—which arrived during the military build-up of mid-1962—all of the Soviet vessels were transferred to Cuban control upon delivery. Since then, they have been used for training, escort, and patrol missions.

The Komars were transferred to Cuban control this August, at which time most Soviet naval personnel were withdrawn from the island. Although Cubans have not yet conducted a Komar missile-[Typeset Page 1866]firing exercise, the Komar boats are being used on patrol missions off the northern coast.

Cubans have probably been training in coastal defense cruise missile operations since spring, and there are indications that the Soviets have already transferred this weapon system and its four launch sites to Cuban control—possibly to the new Cuban Army “antilanding” forces. When enough Cubans have been trained, ten additional sites could be set up on the island with the 150 cruise missiles delivered during the military build-up last year.

Although unlikely to be used against clandestine raiders, the 35-mile-range cruise missiles would add to Castro’s ability to defend against invasion if operationally deployed about the island in sizable numbers. Effective operation of the missiles will probably depend on Soviet technical assistance for the foreseeable future.

Although maintenance problems continue to plague the Cuban Navy, the operational efficiency of this 5,000- to 6,000-man force has improved under Soviet tutelage. Re-equipped, reorganized, and purged of “unreliable” elements, the Cuban Navy has become a coastal defense force of some ability, increasingly capable of detecting and preventing maritime raids, [Facsimile Page 8] protecting friendly shipping, and maintaining surveillance of vessels and aircraft in coastal waters.

The Soviets have not stinted in their efforts to provide Castro with an independent military capability. Cuba, for example, has more MIG–21 aircraft, Komar guided missile patrol boats, SAM sites, and cruise missiles than most of the bloc countries. Nonetheless, Cuban military forces are hampered by several serious weaknesses which cannot be easily overcome. 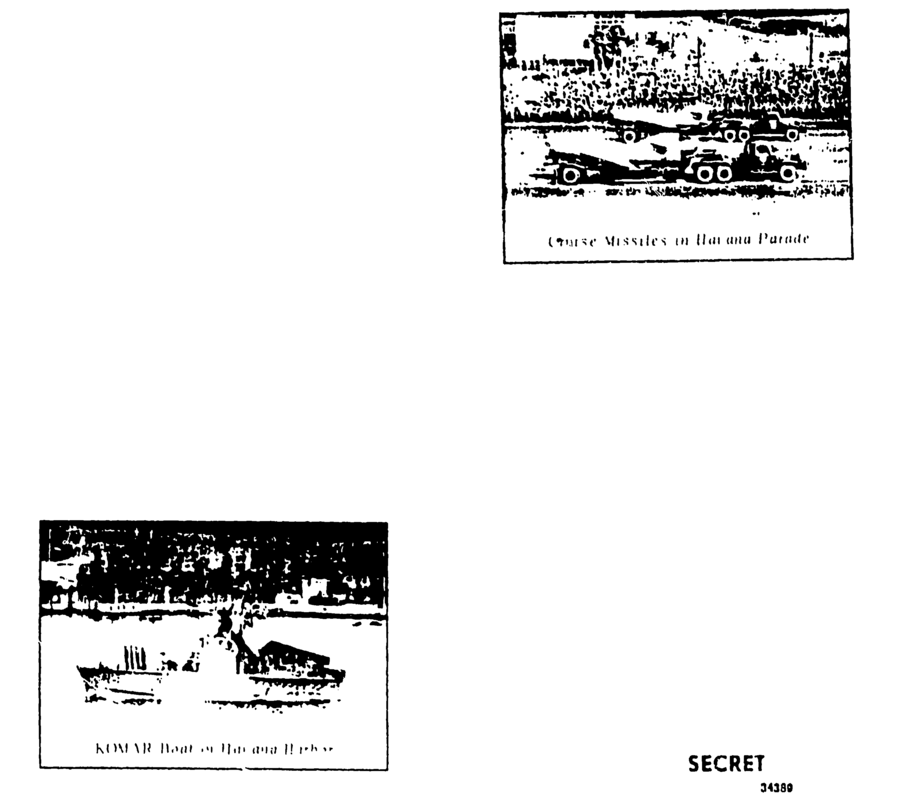 The most serious of these soft spots is dependence on Soviet technical and matériel assistance, a dependence which has increased in proportion to the amount of advanced Soviet equipment introduced. If for any reason this Soviet aid were to be withdrawn, the Cuban military would find itself hard pressed to maintain effective operations, both [Typeset Page 1867] for the lack of Cuban technical know-how and the lack of Soviet supplies. The logistical line from the USSR to Cuba is a very long and vulnerable one.

A second serious limitation on Cuban military effectiveness is the tendency to measure ability in terms of political reliability rather than professional competence. Military purges, while generally successful in eliminating anti-Castro elements, have also rid the services of some of their more capable personnel. While the number of faithful Communists in the armed forces is small, most of the officers and men who remain appear to be loyal Fidelistas. Barring an unforeseen deterioration in living conditions and military discipline, there seems to be little likelihood of widespread disaffection within the military.

Inexperience in combat operations is still another weakness. The lack of skill displayed [Facsimile Page 10] in actual operations against insurgents suggests that only a limited combat capability has thus far been achieved.

Finally, the Cubans lack either the sea- or air-lift capability necessary for conducting overseas military operations. Castro’s paramilitary and harassment capability is probably sufficient for exploiting precarious political situations in the Caribbean area, however.

Barring a significant deterioration in Cuban-Soviet relations, Castro’s military machine should continue to serve as an effective deterrent to internal dissidence, and will become increasingly effective against exile raids and all external threats short of full-scale invasion. In addition, control of the SAM system—if transferred to the Cubans—will ultimately place Castro in a position to cope with US overflights if he decides to attempt such a move.