465. Memorandum Prepared for the Executive Committee of the National Security Council, October 311

THE SITUATION IN CUBA

Further analysis of low-level photography of 29 October provides clear evidence that construction and concealment have continued at the MRBM sites in Cuba since 27 October. Limited and poor photography precludes a positive assessment of construction activity at IRBM sites. There is no evidence that the Soviets are dismantling or vacating any of the sites.

Launch stands, cabling, and other launching components remain in place at each of the MRBM sites. Removal of the cabling would probably be the first step in dismantling operations.

There is increasing evidence that a comprehensive air defense system manned by Soviet personnel is reaching full operational status in Cuba. The communications and control structure of the system, probably not yet completed, now includes at least 14 facilities including radar stations, radio stations, and filter centers. [text not declassified]

[text not declassified] The presence of automatic anti-aircraft weapons and associated radars at some locations, including the ballistic missile sites, reflects efforts to achieve a defensive capability against low-flying aircraft.

Analysis of Soviet merchant ship movements indicates that it would take a minimum of two weeks, and more probably three, to assemble in Cuban ports those Soviet dry-cargo ships with hatches suitable for loading missiles.

Dismantling and movement of essential missile facilities to port areas could probably be accomplished within about 24 hours, but about a week would be required for loading.

Inside Cuba, the armed forces remain mobilized. Cuban radios have announced military exercises, which began yesterday and are to continue through 2 November. [less than 1 line not declassified] continuing efforts to consolidate ground force defensive positions. [less than 1 line not declassified] a unified armed forces command in Oriente province, probably under the direct command of Raul Castro. The Kronstadt-class subchaser that went aground near Banes on 28 October has still not been refloated.

[1 line not declassified] bitter disappointment at the Cuban end of the conversations that the US invasion many Cubans had expected did not materialize. The CIA station in Florida reports that the morale of the Cuban exile community there has not been at such a low ebb since the failure of the April 1961 invasion.

The possibility of a Cuban reaction against the USSR or of some kind of problem within the Cuban leadership is suggested [text not declassified].

U Thant’s conversations with Castro yesterday went badly, [1½ lines not declassified] the Cubans refuse any form of inspection or any foreign presence in their territory. U Thant still has hopes of “shaking them out” of this position in meetings set for this morning. If not, he may call a Security Council meeting for Thursday to seek more guidance.

Cuban propaganda themes yesterday strongly suggest that Castro is insisting that his “five points”—demands for major US concessions before any US non-aggression guarantee would be acceptable to him—be injected into UN discussions of the issue. Soviet propaganda media have begun to refer to these as “just Cuban demands.”

[1½ lines not declassified] President Goulart’s special emissary, Brazilian pro-Communist General Albino da Silva, was received by Castro immediately on arrival on 29 October. [less than 1 line not declassified] da Silva’s objective is to “restore the prestige” of Castro in Cuba and Latin America by returning the Cuban crisis to the level of a bilateral US-Cuban problem.

Soviet First Deputy Foreign Minister Kuznetsov yesterday again assured Ambassador Stevenson “emphatically” that the offensive mis[Typeset Page 1297]siles in Cuba would be dismantled and removed, after which verification could be undertaken by any means the US desired. He said Khrushchev had told him dismantling would take two or three weeks.

The UN Secretary-General’s office has already been in touch with the International Committee of the Red Cross, which has agreed to inspect shipping reaching Cuba. The ICRC is thinking in terms of a staff of 30 which would be briefed in New York before beginning its work.

Foreign Minister Gromyko told Ambassador Kohler yesterday that the USSR wants to reach agreement as quickly as possible on the basis of the Kennedy-Khrushchev exchange of letters.

Soviet UN officials appear to be trying to convince neutralist representatives that the lesson of the Cuban crisis is “the sinister nature” of all foreign bases and the need for their liquidation, in particular Guantanamo.

In the Geneva talks on a nuclear test ban, a Soviet delegate argued that the Cuban settlement reduces international tension to a point where the West should drop its demands for international controls and on-site inspection.

Moscow propaganda expresses concern that the US still harbors aggressive intentions against Cuba and that Cuban exile groups are plotting against the Castro regime. Moscow has warned that the crisis has not ended and has called for “strict fulfillment” of US pledges of “noninterference in the internal affairs of Cuba.”

Soviet propaganda thus far gives no clear indication of policy decisions concerning future diplomatic efforts. A Moscow commentator, however, has endorsed Castro’s five demands of 28 October as “just proposals,” and the East German Neues Deutschland also has called for the US to evacuate its Guantanamo base.

Additional themes which have received a fair amount of emphasis in Soviet broadcasts are calls for removal of the US quarantine of Cuba and for the removal of US missile bases in Turkey.

Izvestiya yesterday gave readers a relatively clear picture of Soviet withdrawal in the face of US threats, but otherwise Moscow has shown considerable sensitivity to suggestions of a Soviet retreat, hailing the settlement as “a major victory for Soviet policy.”

Chinese Communists are making their opposition to Soviet policy on Cuba increasingly clear. The editorial in today’s People’s Daily says [Typeset Page 1298] that President Kennedy has given nothing but “empty promises” and that his “so-called assurance” against invading Cuba is only a “hoax.”

Usually reliable sources report that Latin American Communist parties are encountering considerable rank-and-file criticism of the USSR over the Cuban settlement. A Communist leader in Panama felt Khrushchev should have “sacrificed” Cuba in such a way as to provoke sympathy for Cuba and condemnation of the US. A leader of the pro-Castro Chilean Socialist party noted that public opinion has suddenly turned against Cuba, and the party is reconsidering its pro-Castro stand. 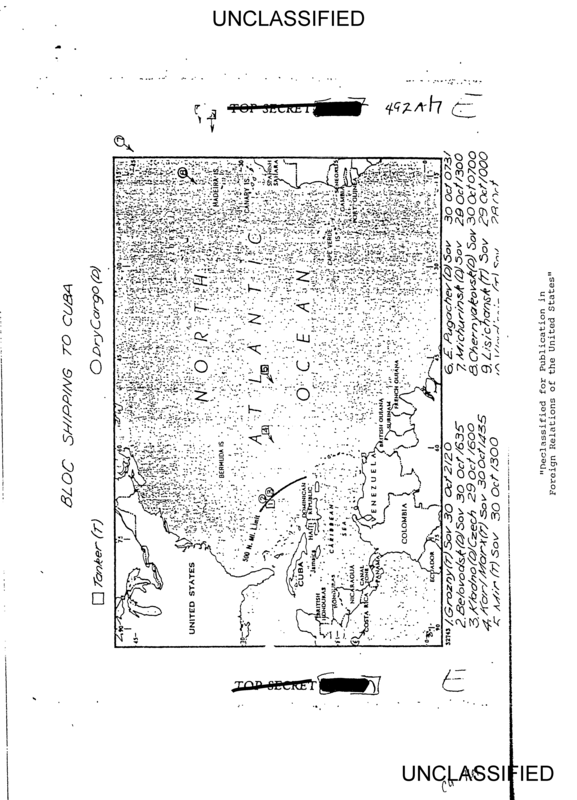 No significant changes have been noted in the disposition or readiness posture of the major Soviet and satellite military forces.

As of 0600 EST there are five Soviet tankers (LISICHANSK, MIR, KARL MARX, GROZNY and VLADIMIR), four Soviet dry-cargo vessels (BELOVODSK, E PUGACHEV, MICHURINSK and CHERNYAKOVSK) and one Czechoslovak dry cargo vessel (KLADNO) en route [Typeset Page 1299] to Cuba. As of 2100 EST last night, the GROZNY and the BELOVODSK were waiting, dead in the water, near the quarantine line. KLADNO was hove to in the same area on 29 October, but we have no later position report.