Political and Security Relations between the United States and Western Europe, 1977–1981

Relations between the United States and Western Europe were mixed during the presidency of Jimmy Carter. Western European capitals greeted the November 1976 election of President Carter with optimism, but tensions soon developed between Washington and Western Europe over how to best manage relations with the Soviet Union. Opposition on the part of the European public to European political leadership’s approach on how to deal with this issue also complicated matters. Nevertheless, changes in the political landscape of Western Europe provided opportunities for improved cooperation and understanding between the United States and Europe. Washington learned to live with Eurocommunism, nurtured closer ties to new democracies in southern Europe, and worked more closely with its European partners on counterterrorism measures. Despite these positive developments, conflicting ideas over how to address the 1979 U.S. hostage crisis in Tehran and the Soviet intervention in Afghanistan negatively impacted the U.S.-Western Europe partnership. When Carter left the White House in 1981, U.S. relations with Western Europe remained close yet strained. 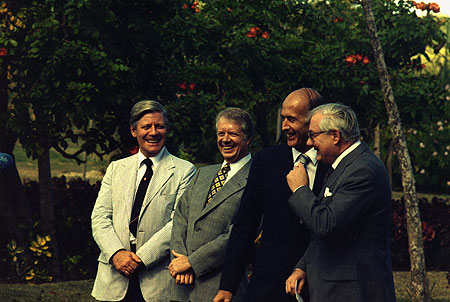 Many European government officials and members of the public supported the policy of détente undertaken by the administrations of Presidents Richard M. Nixon and Gerald R. Ford as a pragmatic approach to reducing the Soviet threat. The Carter administration’s renewed attention to human rights violations in the Soviet Union and Eastern Europe, along with its opposition to Soviet interventions in the Third World, triggered anxieties in countries such as West Germany that détente might be undermined.

Regional security issues played a major role in the U.S.-Western Europe relationship during this period. Despite arms control agreements such as Strategic Arms Limitation Talks (SALT) I, the Soviet Union continued to expand its conventional forces; in 1977, the Soviet Union began to deploy new intermediate-range ballistic missiles (IRBMs) in Eastern Europe. Many Western Europeans looked to the United States to lead efforts to respond to the continued Soviet military build-up.

Starting in the summer of 1977, the subject of enhanced radiation weapons (ERWs) created new tensions between Washington and Western European nations. Often referred to as neutron bombs, ERWs were designed to cause a greater share of casualties from radiation rather than explosive force. In June 1977, when the U.S. press reported that the United States would develop ERWs, public reaction was largely negative, particularly in Europe. Some decried the neutron bomb as the “perfect” capitalist weapon that would limit damage to buildings but could expose civilians to greater danger. Many European political leaders supported deployment of the neutron bombs and invested intense effort to convince their citizens of the weapon’s necessity. However, in April 1978 President Carter decided to defer production of ERWs. Carter’s decision frustrated European leaders who had spent political capital to support the deployment of a weapons system that would not be produced.

While the United States negotiated bilaterally with the Soviet Union on the SALT II agreement, the North Atlantic Treaty Organization (NATO) countries sought to counter the IRBM threat to Western Europe. In December 1979, NATO approved a “dual-track” response: deploying Pershing II and cruise missiles while simultaneously seeking to negotiate reductions in theatre nuclear forces with the Soviet Union. The planned missile deployment was a contentious issue in some capitals. European public opinion trends showed resistance to the stationing of new missiles on Western European soil motivated by concerns that it would make Western Europe more vulnerable to Soviet attacks. Despite public resistance, West Germany and Italy approved deployment of the missiles on their territories without conditions. Other governments, such as Belgium and the Netherlands, hesitated or initially resisted the move, which put pressure on their bilateral relationships with Washington.

The changing political landscape in Western Europe also had a significant impact on U.S.-Western European relations during this time. In the 1970s, communist parties in Western Europe, particularly in Italy, became more independent from policy set in Moscow. Communist groups throughout the region worked more closely within their national systems, and in some cases even entered into ruling coalition governments. This movement, known as Eurocommunism, altered how Washington and its overseas representatives worked with European policymakers. Previously U.S. policy limited the United States to working only with anti- or non-communist groups and politicians. In response to the trend toward Eurocommunism, the Carter administration decided that U.S. diplomats should engage with a broader cross-section of politicians, opinion makers, and the public.

In southern Europe, fears about the rise of communism were also put to rest. During the Ford administration, the Carnation Revolution (1974) and the death of Spanish Head of State General Francisco Franco (1975) that ended authoritarian regimes in Portugal and Spain respectively, provoked anxiety in Washington about a possible communist takeover of the Iberian Peninsula. By the Carter years it became clear that both Spain and Portugal were peacefully transitioning to democracy. Frequent visits by high-level U.S. officials helped reaffirm Washington’s solidarity with these countries and support for the fledgling democracies in Lisbon and Madrid. Renegotiations of U.S. rights to use military bases in Spain and Portugal further underlined the strengthened relationship between Iberia and the United States. Likewise, by late 1978, the Italian Communist Party’s efforts to participate in government had been frustrated and the party suffered electoral losses, thus reducing concerns about communist influence in Italy.

The European political scene was also affected by a sharp uptick in domestic terrorism in Western Europe. Leftist and separatist terrorist groups, such as the Baader Meinhof Group (West Germany), Red Brigades (Italy), and Euzkadi ta Azkatasuna(ETA; Spain) operated throughout the region. While their targets were most often European soldiers, officials, and business leaders, by the late 1970s, these groups also threatened U.S. diplomats, and U.S. representatives in the region were forced to tighten security. In response, the United States and its Western European partners began to coordinate their efforts to limit terrorism. European authorities and their U.S. counterparts worked together more closely to combat terrorism on European soil.

Despite these areas of increased cooperation between Western European nations and the United States, the events of late 1979 cast a pall over the transatlantic relationship. Differences emerged over how to best handle relations with Iran after Iranian militants stormed the U.S. Embassy in Tehran and took over 60 U.S. diplomats hostage. U.S. and European leaders disagreed over the appropriate response to the hostage crisis, including economic and diplomatic sanctions. Similar tensions emerged over how to confront Moscow after the Soviet Union’s December 1979 intervention in Afghanistan. Carter reacted with a series of measures designed to pressure the Soviets to withdraw, but the Europeans did not agree with all aspects of his decisions. The invasion of Afghanistan led to an escalation of tensions between the Soviet Union and the United States and ultimately drew Carter’s attention away from Europe. The re-intensification of the Cold War chagrined many in Western Europe, who advocated a rapprochementbetween Washington and Moscow as a means to reduce the security threat posed to their region.