Jimmy Carter campaigned for the presidency in 1976 promising substantial changes in the conduct of U.S. foreign policy. He intended to infuse a new morality in American diplomacy, one grounded in the pursuit of human rights.Carter made this cause explicit in his January 20, 1977, inaugural address: “Because we are free, we can never be indifferent to the fate of freedom elsewhere. Our moral sense dictates a clear-cut preference for those societies which share with us an abiding respect for individual human rights.” The Carter administration thus articulated, devised, and implemented a human rights strategy that would serve as the cornerstone of Carter’s foreign policy. 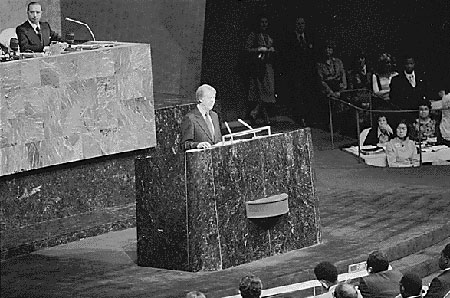 Criticism of human rights abuses in other nations served as an early indication that Carter’s inaugural address marked an ideological shift in U.S. foreign policy. During the early weeks of the administration, officials spoke out against harassment and human rights violations in Czechoslovakia, the Soviet Union, and Uganda.When asked at a January 31, 1977, press conference if the administration would continue to address specific human rights issues or exert quiet diplomatic pressure, Secretary of State Cyrus Vance explained that the United States “will speak frankly about injustice, both at home and abroad,” while avoiding strident and polemical language. Vance cautioned, though, that the administration would not “comment on each and every issue” but would comment “when we see a threat to human rights” and when it was “constructive to do so.” The administration also linked human rights concerns directly to the conduct of foreign policy, including support for a bill halting importation of Rhodesian chrome and the reduction of foreign aid to other nations that did not display sufficient respect for human rights.

Carter further defined these efforts in a series of public addresses delivered in early 1977. These speeches also afforded Carter the opportunity to explain why and how his administration promoted human rights. Speaking before the United Nations General Assembly on March 17, 1977, the President asserted that the United States had a “historical birthright” to be associated with human rights. While the United States had not always lived up to this ideal, Carter identified several steps to rectify U.S. shortcomings “quickly and openly,” including the liberalization of travel policies and the signing and ratification of international human rights covenants. In his May 22, 1977, commencement address, delivered at Notre Dame University, Carter drew a distinction between his policy and the policies of his predecessors, noting that they had pursued the “flawed and erroneous principles and tactics of our adversaries.” As a result, the United States had moved away from its core values. The interdependent world of the 1970s required a “new American foreign policy” grounded in cardinal principles, including the “commitment to human rights as a fundamental tenet of our foreign policy.” The Notre Dame address served as a comprehensive statement and justification of Carter’s human rights policy.

Vance refined the policy in an April 30, 1977, address at the University of Georgia Law School. He promoted adherence to three human rights categories—the right to be free from government violation of the integrity of the person; the right to fulfill vital needs such as food, shelter, and education; and civil and political rights. Vance explained flexibility characterized implementation of policy, depending on the details of particular cases. The United States had to accept limits in pursuing human rights; a rigid approach to imposing U.S. values on other nations would not allow the United States to achieve its objectives in this area.

These public declarations coincided with and guided the administration’s effort to translate Carter’s commitment into a broader strategy. In May 1977, the administration issued Presidential Review Memorandum/NSC 28, which directed a review of U.S. human rights policy in order to define policy objectives, evaluate actions designed to improve rights, review national security considerations, and propose implementing actions. The completed PRM/NSC 28 study’s recommendations formed the basis for Presidential Directive 30, issued in February 1978. Noting that a major objective of U.S. foreign policy should be the observance of global human rights, Presidential Directive 30 outlined specific guidelines for U.S. human rights policy and indicated the types of rights the United States would protect. The United States would use “the full range of diplomatic tools,” including public statements, consultations with allies, and cooperation with non-governmental actors and international organizations. The directive linked economic and military assistance to the human rights records of the recipients; countries with good or improving records would receive favorable consideration, while those nations with poor or deteriorating records would not. Presidential Directive 30 thus formally defined U.S. policy on human rights.

Managing human rights policy also required the administration to establish new coordinating and evaluation mechanisms. To ensure that all bureaus engaged on human rights issues, Vance tasked Deputy Secretary of State Warren Christopher with creating a Human Rights Coordinating Group (HRCG), consisting of Department of State officials at the deputy assistant secretary level, to serve as an “internal mechanism” for decision-making. Recognizing that the United States could not examine economic and security assistance decisions in a vacuum, Assistant to the President for National Security Affairs Zbigniew Brzezinski directed Vance and Secretary of the Treasury W. Michael Blumenthal to establish a group—the Interagency Working Group on Human Rights and Foreign Assistance—to evaluate, on a case-by-case basis, bilateral and multilateral aid decisions as they related to human rights and to provide guidance to ensure a unified government position on aid decisions. Brzezinski had also established within the National Security Council (NSC) a Global Issues Cluster responsible for overseeing issues such as human rights and arms control.