At the end of December 1979, the Soviet Union sent thousands of troops into Afghanistan and immediately assumed complete military and political control of Kabul and large portions of the country. This event began a brutal, decade-long attempt by Moscow to subdue the Afghan civil war and maintain a friendly and socialist government on its border. It was a watershed event of the Cold War, marking the only time the Soviet Union invaded a country outside the Eastern Bloc—a strategic decision met by nearly worldwide condemnation. While the massive, lightning-fast military maneuvers and brazenness of Soviet political objectives constituted an “invasion” of Afghanistan, the word “intervention” more accurately describes these events as the culmination of growing Soviet domination going back to 1973. Undoubtedly, leaders in the Kremlin had hoped that a rapid and complete military takeover would secure Afghanistan’s place as an exemplar of the Brezhnev Doctrine, which held that once a country became socialist Moscow would never permit it to return to the capitalist camp. The United States and its European allies, guided by their own doctrine of containment, sharply criticized the Soviet move into Afghanistan and devised numerous measures to compel Moscow to withdraw. 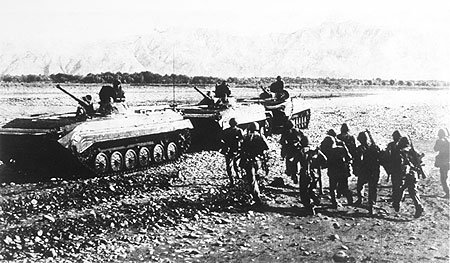 In the summer of 1973, Mohammed Daoud, the former Afghan Prime Minister, launched a successful coup against King Zahir. Although Daoud himself was more nationalist than socialist, his coup was dependent on pro-Soviet military and political factions. Since 1955 Moscow had provided military training and materiel to Afghanistan; by 1973, a third of active troops had trained on Soviet soil. Additionally, Daoud enjoyed the support of the People’s Democratic Party of Afghanistan (PDPA), founded in 1965 upon Marxist ideology and allegiance to Moscow. In 1967 the PDPA split into two factions: the Parchamists, led by Babrak Karmal (who supported Daoud), and the “Khalqis” led by Noor Taraki. For the next five years, Daoud attempted the impossible task of governing Afganistan’s Islamic tribal regions, while also struggling to reconcile the PDPA split. But the more radical Khalq faction never fully recognized Daoud’s leadership, while Karmal viewed the coup largely as a means to consolidate his own power. In response, Daoud hoped to mitigate both of these threats by steering Afghanistan away from Soviet influence and improving U.S. relations, while decreasing the influence of radical elements in the government and military.

Daoud’s middle course ended in disaster. On April 28, 1978, soldiers aligned with Taraki’s “Khalq” faction assaulted the presidential palace, where troops executed Daoud and his family. In the following days Taraki became the Prime Minister, and, in an attempt to end the PDPA’s divisions, Karmal became Deputy Prime Minister. In Washington, this Communist revolution was met with alarm. The Carter administration recognized that Taraki would undo Daoud’s attempt to steer Afghanistan away from Moscow, and it debated whether to cut ties with Afghanistan or recognize Taraki in the hopes that Soviet influence could be contained. Although the President’s Assistant for National Security Affairs Zbigniew Brzezinski advocated the former course, Carter supported the Department of State’s advocacy of recognition. Shortly after the revolution, Washington recognized the new government and soon named Adolph Dubs its Ambassador to Afghanistan. Until his kidnapping and death at the hands of Afghan Shia dissidents in February 1979, Dubs strongly pursued good relations with the Taraki regime in the hopes that U.S. support would keep Soviet influence at bay.

Once again, the tumult of internal Afghan politics complicated both U.S. and Soviet jockeying. In the summer of 1979, Hafizullah Amin, a longtime ally of Taraki who became Deputy Prime Minister following the April Revolution, received word that Babrak Karmal (Daoud’s early supporter) was leading a Parcham plot to overthrow the Taraki regime. Amin took the opportunity to purge and execute many Parchamists and consolidate his own power. Complicating matters further, this internal strife damaged the Kabul Government’s major national program, namely, to bring the Communist revolution to the Islamic tribal areas beyond Kabul. By the winter of 1978, this program was met by armed revolt throughout the country. In response, Amin and Taraki traveled to Moscow to sign a friendship treaty which included a provision that would allow direct Soviet military assistance should the Islamic insurgency threaten the regime. This insurrection intensified over the next year and it became increasingly obvious to the Soviets that Taraki could not prevent all-out civil war and the prospect of a hostile Islamic government taking control. By mid-1979 Moscow was searching to replace Taraki and Amin, and dispatched combat troops to Bagram Air Base outside of Kabul. This move prompted the Carter administration to begin supplying non-lethal aid to Afghan mujahedeen, or Islamic insurgents. In August, a high-ranking Soviet military delegation arrived in Kabul to assess the situation. U.S. officials interpreted this mission as one last Soviet attempt to shore up the Taraki regime, and also an opportunity to devise a military takeover. Regarding the latter, most analysts in Washington believed that such a move remained possible but unlikely.

But this calculus was bound to change. Amin sensed the Soviet mission was designed to strengthen Taraki at his expense. In response, forces loyal to Amin executed Taraki in October—a move that infuriated Moscow, which began amassing combat units along its border. At this juncture Washington was still unsure how to interpret the Soviet maneuvers: was the Soviet Union planning a full takeover or did it remain committed to preserving the April Revolution? Analysts remained skeptical that Moscow would occupy the country given the political and economic costs. By the winter of 1979, faced with mutinies and an uncertain leadership, the Afghan Army was unable to provide basic security to the government against the onslaught of Islamic fighters nearing Kabul. By that point the Soviets were sending in motorized divisions and Special Forces. Washington demanded an explanation, which the Soviets ignored. Finally, on Christmas Eve, the invasion began. Soviet troops killed Amin and installed Babrak Karmal as the Soviet’s puppet head of government.

Although the Carter administration had closely watched this buildup from the outset, its reaction following the invasion revealed that, until the end, it clung to the hope that the Soviets would not invade, based on the unjustified assumption that Moscow would conclude that the costs of invasion were too high. In response, Carter wrote a sharply-worded letter to Brezhnev denouncing Soviet aggression, and during his State of the Union address he announced his own doctrine vowing to protect Middle Eastern oil supplies from encroaching Soviet power. The administration also enacted economic sanctions and trade embargoes against the Soviet Union, called for a boycott of the 1980 Moscow Olympics, and stepped up its aid to the Afghan insurgents. In sum, these actions were Washington’s collective attempt to make the Soviets’ “adventure” in Afghanistan as painful and brief as possible. Instead, it took ten years of grinding insurgency before Moscow finally withdrew, at the cost of millions of lives and billions of dollars. In their wake, the Soviets left a shattered country in which the Taliban, an Islamic fundamentalist group, seized control, later providing Osama bin Laden with a training base from which to launch terrorist operations worldwide.