In the summer of 1977, Somalia, a poverty -stricken country in the Horn of Africa, invaded its equally poor neighbor, Ethiopia, in hopes of conquering the Ogaden Desert region, which was populated by ethnic Somalis. What began as a local conflict in a far-flung region of the world grew into a Cold War hotspot as the United States and the Soviet Union took sides. 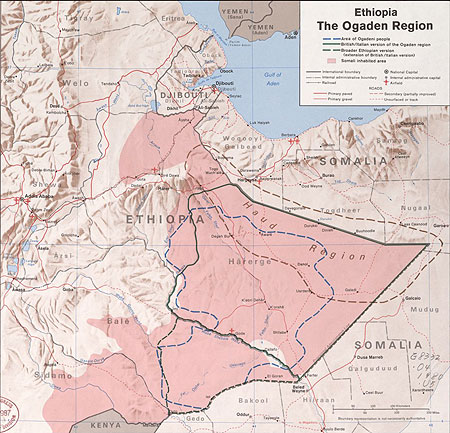 The United States had supported the long-ruling Emperor Haile Selassie in Ethiopia. The Emperor enjoyed great status as an international statesman, but ultimately failed to deliver basic services to his impoverished people. Several famines in the 1960s and early 1970s finally brought about a revolution in 1973 that upended the formerly feudal societal structure. The revolution was originally led by urbanites such as laborers, students, and taxi drivers, but soon a group of mid-level Army officers filled the leadership void and eventually arrested and deposed Haile Selassie in September 1974. The ideological direction of the revolution was not clear at first, and the United States attempted to maintain relations with the new leadership. However, after Mengistu Haile Miriam had his rivals killed and became the dominant leader of Ethiopia, the revolution took a communist turn, and he reached out to the Soviet Union to replace U.S. military aid. The Soviet Union agreed to fund its new ally and hoped that Ethiopia and Somalia could form a communist federation.

In Somalia, Mohammed Siad Barre had seized power in a coup in 1969 and had declared Somalia a socialist republic. The Soviet Union and Somalia had then signed a Treaty of Friendship and Cooperation in 1974. However, Siad Barre had designs on the Ogaden region of Ethiopia and resented the growing closeness between Ethiopia and the Soviet Union. In response, the Somali dictator reached out to the United States in hopes of securing military aid and eventually expelled the Soviets from the country. The Soviets chose to support Addis Ababa, keeping the bigger prize in the zero sum game of the Cold War. The United States was actively considering aid to Mogadishu when Somalia invaded Ethiopia, completing the total flip in the alliances.

Siad Barre wanted to take advantage of Ethiopia’s fragmented society when he invaded. The leadership in Addis Ababa faced a long-running rebellion in Eritrea as well as insurgency by the ethnic Somalis in the Ogaden and Mengistu was still focused on consolidating his own power. Somalia, therefore, had the upper hand in the early phase of the war and advanced toward the major Ethiopian cities in the region. However, the Soviet Union began a massive airlift that autumn of Soviet military advisors and supplies, and also Cuban troops to aid the beleaguered Marxist regime, turning the tide of the war.

The United States was alarmed at such a large scale Soviet and Cuban intervention in Africa. Since this occurred on the heels of the communist countries’ involvement in Angola, the administration of President Jimmy Carter feared that a pattern was emerging. The conflict in the Horn and the Soviet intervention also occurred in an era of détente between the United States and the Soviet Union. Détente was a series of agreements between the two superpowers that were meant to reduce tensions. For Moscow, détente represented a chance to be recognized as an equal power to Washington. Washington, on the other hand, saw détente as a way to draw the Soviet Union further into the international system and exercise some influence over Soviet behavior in the Third World. The United States, therefore, used the Horn of Africa conflict as a test case for its understanding of détente.

The members of the Carter administration’s National Security Council (NSC) disagreed on an appropriate response to the Soviet intervention and they divided into two main camps. In particular, Carter’s National Security Advisor, Zbigniew Brzezinski, argued that the United States needed a bold response and that the administration could not let the Soviets get away with intervention in the Horn or else they would become emboldened elsewhere in Africa. Another faction of the NSC, led by Secretary of State Cyrus Vance, argued that the Soviets were just taking advantage of an opportunity and a hard stance against the Soviets vis-à-vis their Africa policy would jeopardize progress on more important bilateral relations.

While Vance won the initial arguments and the United States refrained from sending a carrier task force to the region as Brzezinski proposed, members of the administration continued to raise their concerns with their Soviet counterparts. Brzezinski and later Carter himself began to speculate publicly that the Soviet behavior in the Horn of Africa was undermining Congressional willingness to ratify a new agreement on the Strategic Arms Limitation Talks (SALT), the lynchpin of détente. Vance, on the other hand, feared that Brzezinski’s rhetoric was what was causing members of Congress to link the two issues. The Soviets could not understand why the United States attached such importance to their intervention in the Horn and made no attempt to come to an understanding on the issue.

The Horn of Africa crisis turned out to be the first in a series of disagreements between the superpowers over the Third World that occurred during the Carter years. Events on the Horn were followed by problems in Zaire, Yemen, Cuba and finally, the Soviet invasion of Afghanistan in December 1979. After the invasion, President Carter withdrew the SALT II treaty from Congressional consideration, leading Brzezinski to claim that “SALT lies buried in the sands of the Ogaden.”