President Jimmy Carter took office in January 1977 as a Washington outsider, pledging to restore a sense a morality to both domestic and foreign policy following the traumas of the Vietnam War and Watergate. Morality, he believed, existed as the best foundation for exerting U.S. power and influence. Carter envisioned that his foreign policy, “derived from a longer view of global change,” would move the United States away from operating within a bipolar or tripolar context to one taking into account an increasingly complicated and interdependent world. 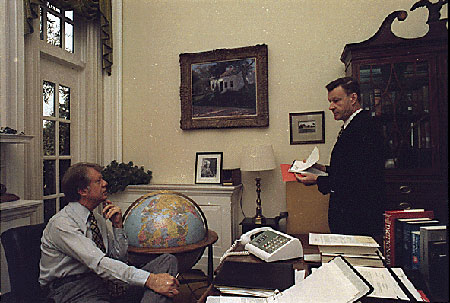 Although the former Governor of Georgia had limited foreign policy experience, Carter had engaged in international trade issues and had been invited to join the Trilateral Commission, a consortium of business executives, government officials, and academics from North America, Japan, and Europe. These activities broadened his understanding of global issues and brought him into contact with individuals who had spent much of their careers in Washington, including Zbigniew Brzezinski and Cyrus Vance, both of whom had served in various capacities during the Lyndon B. Johnson administration. Carter relied on Brzezinski and Vance to advise him during the 1976 presidential campaign and offered them the positions of National Security Adviser and Secretary of State, respectively, after he won election in November 1976. Carter’s foreign policy team also included former Senator Walter F. Mondale (DFL-Minnesota), whom Carter would select as his vice presidential running mate and former California Institute of Technology President Harold Brown, whom Carter would nominate for Secretary of Defense. These principals, later including Secretary of State Edmund Muskie, established a collegial working relationship, characterized by their weekly foreign policy breakfasts. Vance, Brzezinski, and Brown also met weekly for an informal V–B–B luncheon to discuss decisions that did not rise to the level of a formal interagency meeting. Although Vance and Brzezinski respected one another, they differed over the administration’s approach to certain issues, notably relations with the Soviet Union. This tension became more pronounced and visible by the midpoint of the administration.

Carter’s management of foreign policy reflected his preference for simplifying the structures established by his predecessors. In two Presidential Directives issued on January 20, 1977, Carter stated the direction of the work of the National Security Council and participating agencies and the reorganization of the National Security Council. PD/NSC–1 established both the Presidential Review Memorandum, designed to structure the reviews and analyses of foreign policy issues undertaken by agencies, and the Presidential Directive, the statement of presidential decisions on national security matters. PD/NSC–2 reaffirmed the functions, membership, and responsibilities of the National Security Council, as set out in the National Security Act of 1947 and also created the NSC Policy Review Committee (PRC) and the NSC Special Coordination Committee (SCC). The Policy Review Committee formulated policy for presidential decision on cases where responsibilities fell within a particular agency but had implications for other departments or agencies. Issues such as defense or international economic policy fell within the scope of the PRC; Brzezinski had the latitude to choose a particular PRC chair based on the subject matter under consideration. The Special Coordination Committee dealt with the coordination and implementation of foreign policy related to specific issues such as arms control, intelligence, and crisis management; Brzezinski chaired the SCC. Carter also retained the flexibility of appointing NSC ad hoc groups to advise him on issues “transcending” departmental boundaries. Within the National Security Council, Brzezinski trimmed the staff and reorganized it along geographical and functional “clusters,” including ones for global issues, international economics, defense coordination, intelligence coordination, and science.

During the 1976 presidential campaign, Carter articulated many of the philosophical roots of his foreign policy. His approach emphasized the maintenance of peace, the pursuit of human rights, the achievement of nuclear non-proliferation, the necessity of international cooperation, and a focus on the developing world rather than on East-West concerns. In defining this policy, Carter admitted that the United States did not alone possess the answers to the world’s problems. It should not impose unilateral solutions, although it could take the lead in advancing policies designed to create a “just and stable” international order. In doing so, the United States would maintain its strategic interests.

Carter enjoyed some early successes in pursuit of his foreign policy objectives. He devoted energy and skill in negotiating and concluding, in 1977 and 1978, two agreements with Panama over the Panama Canal that allowed for joint operations and Panamanian sole control of the Canal by 1999, permanent neutrality and the U.S. right to defend the Canal. Carter also mediated framework discussions between Israeli Prime Minister Menachem Begin and Egyptian President Anwar Sadat in September 1978, resulting in a formal peace agreement between Egypt and Israel in 1979. Carter elevated and institutionalized human rights as a component of foreign-policy decision making and brought increased attention to global human rights abuses. The administration also completed the normalization of relations with China in 1979, initiated during the Nixon administration. In pursuit of global economic cooperation, Carter promoted multilateral efforts such as an expanded and equitable trading system, food reserves, and an international health program.

Regardless of Carter’s desire to substitute world order politics for a bipolar foreign policy, he and his advisers had to engage with the Soviet leadership on a number of crucial issues. Although Carter supported détente, he rejected the Nixon-Kissinger concept of “linkage,” believing that he could speak out against human rights abuses in the Soviet Union, while negotiating arms reductions with Soviet General Secretary Leonid Brezhnev. Although Carter and Brezhnev, in 1979, signed the SALT II Treaty, which limited the total of both nations’ nuclear forces and placed other restrictions on strategic nuclear forces, the Soviet invasion of Afghanistan in December 1979 forced Carter to delay Senate consideration of the treaty. Ultimately, the Senate failed to ratify SALT II.

The Soviet invasion of Afghanistan took place a month after Iranian militants stormed the U.S. Embassy in Tehran and took Americans hostage. In addition to these crises, Carter faced a mounting series of domestic economic problems, including increases in gasoline prices, rising inflation, and rising unemployment. Carter responded to the Soviet invasion by embargoing grain sales, banning technology exports, and prohibiting U.S. participation in the upcoming 1980 Moscow Summer Olympics. He also used his January 1980 State of the Union address to issue a warning that if outside forces interfered in the Persian Gulf, the United States would respond, reserving the right to use military force. This harder stance could not overcome public disillusionment with the Carter administration, made worse by the administration’s inability to secure the release of the hostages. Republican presidential candidate Ronald Reagan and his vice presidential running mate George H.W. Bush capitalized upon this dissatisfaction and, in November 1980, defeated Carter and Mondale.