Counter-Proliferation During the Carter Administration

During his run for the presidency in 1976, former Governor Jimmy Carter made the non-proliferation of nuclear, chemical, biological, and conventional arms a key part of his foreign policy platform.Carter, in a departure from former Presidents Richard Nixon and Gerald Ford, also tried to link his arms control ideas to his emphasis on human rights. After his January 1977 inauguration, Carter immediately began to pursue his counter-proliferation objectives. He also announced that he would link arms control to the human rights records of U.S. allies, in particular in Latin America. 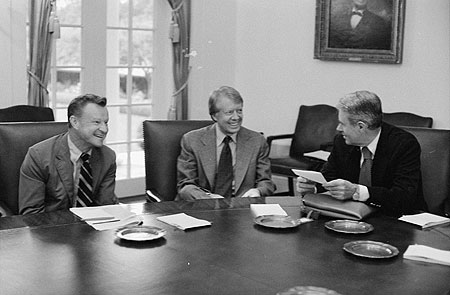 Carter focused on five areas: anti-satellite (ASAT) space systems; chemical and biological weapons (CBW); a comprehensive nuclear testing ban (CTB), even if such tests were used for “peaceful” purposes; the ratification of the Treaty of Tlatelolco by Latin American nations; and the global reduction of conventional arms sales/transfers. The Carter administration’s main negotiating partner in the first three areas was the Soviet Union. Carter’s negotiating partners in the last two areas were the Federal Republic of Germany (FRG), the Soviet Union, and the Latin American allies.

It became quickly apparent that the two superpowers fundamentally diverged on two key points. First was the issue of verification, which also hampered the Strategic Arms Limitation Talks (SALT) negotiations that were occurring simultaneously. Like Nixon and Ford, Carter wanted each side to have the ability to perform on-site inspections (OSIs) and employ National Technical Means (NTM) such as photo reconnaissance flights to verify compliance with agreements. The Soviets, however, rejected both means of verification in the ASAT, CTB, and CBW negotiations.

The second area of disagreement involved definitions of weapons systems. The Soviets demanded that the space shuttle, currently being developed by the United States, be subject to an ASAT treaty. Carter, however, categorically rejected this demand. The ASAT negotiations ended after the Soviet Union invaded Afghanistan in December 1979.

Chemical weapons negotiations bogged down over whether pesticides and other defoliants would be subjected to an arms control agreement, and the Soviet Union and the United States could not agree whether or not binary chemical weapons (those weapons requiring a chemical reaction to activate the toxin) would be included in a potential treaty. These roadblocks had also been a problem during the Nixon and Ford years.

Biological weapons did not become an issue until the spring of 1980, when the United States learned that an outbreak of pulmonary anthrax had killed hundreds, possibly thousands, in Sverdlovsk, the site of a suspected Soviet biological weapons factory. The factory had ostensibly been closed after former President Nixon and Soviet General Secretary Leonid Brezhnev signed the 1972 Biological Weapons Convention that banned the use and production of biological weapons. This apparent violation of the Convention, coming shortly after the Soviet invasion of Afghanistan and Carter’s decision to boycott the Moscow Summer Olympics, further poisoned U.S.-Soviet relations, and the CBW talks languished.

The CTB discussions were the most intense and long-lasting arms control discussions of the Carter years. These negotiations also bogged down over whether Peaceful Nuclear Explosions (PNEs) should be included in an agreement. Carter wanted a comprehensive ban, but the Soviets wanted the ability to perform PNEs, especially to divert the course of a river in Siberia to the desert areas of Central Asia. Like the ASAT and CBW negotiations, the CTB talks were threatened after the Soviet invasion of Afghanistan and the Sverdlovsk incident.When the United States began detecting signs in the summer of 1980 that the Soviets had resumed high-yield testing that violated the 1976 Threshold Test Ban Treaty, Carter abandoned the negotiations.

Talks over nuclear non-proliferation in Latin America also began as soon as Carter took office. Carter had publicly criticized the 1975 sale of a nuclear reactor by the Federal Republic of Germany to Brazil because he worried that the Brazilians would be able to produce weapons-grade uranium. If Brazil developed nuclear weapons it would violate the 1968 Treaty of Ttlatelolco, which had created a Latin American nuclear-free zone. Brazil had signed and ratified the Treaty, but reserved the right not to be bound by all the Treaty's provisions. Only three days into his presidency, Carter learned from the U.S. Department of State that Brazilian-American and German-American relations would be severely jeopardized if he continued to criticize the sale. Meanwhile, Argentina, Brazil’s principal regional rival, refused to ratify the Treaty and began the process of purchasing a nuclear reactor of its own. The Carter administration asked the Mexican Government, which had provided the impetus for the signing of the Treaty, to convince Brazil, Argentina, as well as Cuba, to sign and/or ratify the Treaty without conditions. Washington’s and Mexico City’s efforts failed, and when Carter left office in 1981 the status quo remained.

As noted above, Carter wanted to link his arms control initiatives to human rights, particularly in the area of conventional arms sales. However, Carter found that his human rights rhetoric collided with U.S. security interests. If the United States wished to counterbalance Soviet power, then it could not easily stop selling or transferring conventional arms to its Latin American (and Asian) allies even if their commitment to human rights was suspect. Meanwhile, the Soviet Union increased its arms sales, especially to the developing world. Ultimately, Carter’s National Security Advisor, Zbigniew Brzezinski, successfully convinced Carter that the rise of Cuban and Soviet activity in Central and South America and instability in East Asia meant that the United States must support its anti-communist allies with conventional weapons, despite their human rights records. By the time Carter left office, U.S. conventional arms sales had actually increased.