The North-South Dialogue and Economic Diplomacy

The North-South Dialogue refers to the process through which the developing and newly independent nations of the “third world,” predominantly in Asia, Africa, and Latin America, engaged the industrialized countries of North America and Western Europe in negotiations over changes to the international economic system during the 1970s. 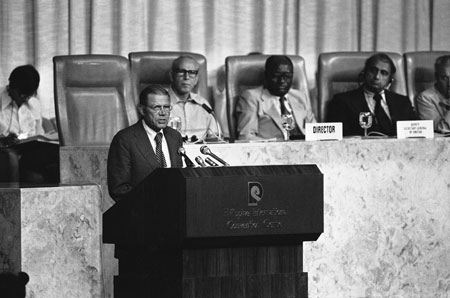 World Bank President Robert McNamara gives his address at the Fifth Session of the United Nations Conference on Trade and Development on Thursday, May 10, 1979 in Manila.(AP Photo)

After World War II, many nations of Latin America became increasingly frustrated with U.S. trade and tariff policies. At the same time, nationalist movements in Asia and Africa helped lead to widespread decolonization. Membership in the United Nations had risen from 51 countries in 1945 to 100 in 1960 and 150 by 1979. The sudden influx of new countries changed the balance of power in the General Assembly and made possible the establishment of the United Nations Conference on Trade and Development, or UNCTAD, in 1964. UNCTAD created a forum through which the “southern” or “third world” nations could propose economic policies, engaging industrial democracies of the “north.” The term “North-South Dialogue” was used to distinguish this dynamic from the East-West conflict of the Cold War, and to stress the point that development issues were just as pressing as the ideological conflict between communists and capitalists.

Several factors increased the willingness of the industrialized nations to negotiate. One was the rising power of oil-producing countries in the Arab world, and another was the U.S. loss in the war in Vietnam, which demonstrated to both the world and the industrialized North that not even wealth and power were enough to guarantee military victory. Both of these issues drew Western attention toward the global balance of economic power. Additionally, the dialogue began in a period of relaxed East-West tensions, which meant that the industrialized world could give more attention to issues like development. The Newly Industrializing Economies, meanwhile, believed the entrenched international economic system benefited developed countries at the expense of the developing world. They hoped to facilitate a reorganization of the international economic system to rectify this imbalance.

The North-South Dialogue addressed issues pertaining to trade and tariffs, international finance, foreign aid, and the governance of multinational companies and institutions. During the era of détente in the 1970s, when East-West tensions were more relaxed, there was a willingness among industrialized nations to cooperate. Even as détente began to falter in the mid-1970s, the parties to the North-South Dialogue continued their discussions.

U.S. policies and relations with the other Northern powers inevitably served to help or hinder progress in the dialogue. For example, changes in trade policies between the United States and Western Europe could serve to distract these countries from their negotiations with the industrializing countries or cause them to extend new levels of control over their interactions within their respective spheres of influence in the developing world. Late in the 1970s, the increasing conflicts between the United States and the Soviet Union finally served to sour the prospects for continuing North-South discussions, as the industrialized nations renewed their focus and redirected their resources to the Cold War and paid less attention to development issues. By September of 1980, the discussions in the United Nations that had characterized this dialogue had lost their momentum. Although some dialogue on these issues continued, it remained a series of discussions on economic issues and never presented the workable solution that its proponents had hoped it would.

There are many ways to interpret the high point of the North-South Dialogue in the 1970s. Some economists have reviewed the southern proposals for broad changes in world economic policy and concluded that they were either fundamentally unworkable or designed to benefit only certain segments of the Third World; others counter that the proposals were necessarily extreme in order to establish a firm position from which to open negotiations with the industrialized North. Either way, the exact implementation of the proposals presented through UNCTAD was always unlikely, because they centered on the Southern ideal and would have required the economically-powerful North to concede every point. The North-South Dialogue can also be viewed as a political struggle between the world’s “haves” and “have-nots.” In this view, the discussions became a vehicle through which the South could unite and assert power within the United Nations and other international organizations to counter the ability of the North to dictate the course of world affairs.