Although relations between the Soviet Union and the United States had been strained in the years before World War II, the U.S.-Soviet alliance of 1941–1945 was marked by a great degree of cooperation and was essential to securing the defeat of Nazi Germany. Without the remarkable efforts of the Soviet Union on the Eastern Front, the United States and Great Britain would have been hard pressed to score a decisive military victory over Nazi Germany. 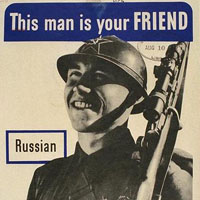 As late as 1939, it seemed highly improbable that the United States and the Soviet Union would forge an alliance. U.S.-Soviet relations had soured significantly following Stalin’s decision to sign a non-aggression pact with Nazi Germany in August of 1939. The Soviet occupation of eastern Poland in September and the “Winter War” against Finland in December led President Franklin Roosevelt to condemn the Soviet Union publicly as a “dictatorship as absolute as any other dictatorship in the world,” and to impose a “moral embargo” on the export of certain products to the Soviets. Nevertheless, in spite of intense pressure to sever relations with the Soviet Union, Roosevelt never lost sight of the fact that Nazi Germany, not the Soviet Union, posed the greatest threat to world peace. In order to defeat that threat, Roosevelt confided that he “would hold hands with the devil” if necessary.

Following the Nazi defeat of France in June of 1940, Roosevelt grew wary of the increasing aggression of the Germans and made some diplomatic moves to improve relations with the Soviets. Beginning in July of 1940, a series of negotiations took place in Washington between Under-Secretary of State Sumner Welles and Soviet Ambassador Constantine Oumansky. Welles refused to accede to Soviet demands that the United States recognize the changed borders of the Soviet Union after the Soviet seizure of territory in Finland, Poland, and Romania and the reincorporation of the Baltic Republics in August 1940, but the U.S. Government did lift the embargo in January 1941. Furthermore, in March of 1941, Welles warned Oumansky of a future Nazi attack against the Soviet Union. Finally, during the Congressional debate concerning the passage of the Lend-Lease bill in early 1941, Roosevelt blocked attempts to exclude the Soviet Union from receiving U.S. assistance. 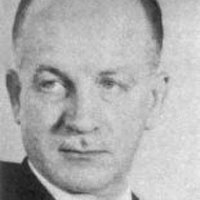 The most important factor in swaying the Soviets eventually to enter into an alliance with the United States was the Nazi decision to launch its invasion of the Soviet Union in June 1941. President Roosevelt responded by dispatching his trusted aide Harry Lloyd Hopkins to Moscow in order to assess the Soviet military situation. Although the War Department had warned the President that the Soviets would not last more than six weeks, after two one-on-one meetings with Soviet Premier Josef Stalin, Hopkins urged Roosevelt to assist the Soviets. By the end of October, the first Lend-Lease aid to the Soviet Union was on its way. The United States entered the war as a belligerent in late 1941 and thus began coordinating directly with the Soviets, and the British, as allies.

Several issues arose during the war that threatened the alliance. These included the Soviet refusal to aide the Polish Home Army during the Warsaw Uprising of August 1944, and the decision of British and U.S. officials to exclude the Soviets from secret negotiations with German officers in March of 1945 in an effort to secure the surrender of German troops in Italy. The most important disagreement, however, was over the opening of a second front in the West. Stalin’s troops struggled to hold the Eastern front against the Nazi forces, and the Soviets began pleading for a British invasion of France immediately after the Nazi invasion in 1941. In 1942, Roosevelt unwisely promised the Soviets that the Allies would open the second front that autumn. Although Stalin only grumbled when the invasion was postponed until 1943, he exploded the following year when the invasion was postponed again until May of 1944. In retaliation, Stalin recalled his ambassadors from London and Washington and fears soon arose that the Soviets might seek a separate peace with Germany. 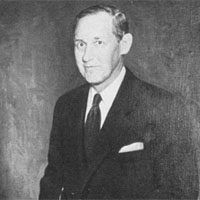 In spite of these differences, the defeat of Nazi Germany was a joint endeavor that could not have been accomplished without close cooperation and shared sacrifices. Militarily, the Soviets fought valiantly and suffered staggering casualties on the Eastern Front. When Great Britain and the United States finally invaded northern France in 1944, the Allies were finally able to drain Nazi Germany of its strength on two fronts. Finally, two devastating atomic bomb attacks against Japan by the United States, coupled with the Soviets’ decision to break their neutrality pact with Japan by invading Manchuria, finally led to the end of the war in the Pacific.

Furthermore, during the wartime conferences at Tehran and Yalta, Roosevelt secured political concessions from Stalin and Soviet participation in the United Nations. While President Roosevelt harbored no illusions about Soviet designs in Eastern Europe, it was his great hope that if the United States made a sincere effort to satisfy legitimate Soviet security requirements in Eastern Europe and Northeast Asia, and to integrate the U.S.S.R. into the United Nations, the Soviet regime would become an international team player and moderate its authoritarian regime. Unfortunately, soon after the war, the alliance between the United States and the Soviet Union began to unravel as the two nations faced complex postwar decisions.