Between 1937 and 1941, escalating conflict between China and Japan influenced U.S. relations with both nations, and ultimately contributed to pushing the United States toward full-scale war with Japan and Germany.

At the outset, U.S. officials viewed developments in China with ambivalence. On the one hand, they opposed Japanese incursions into northeast China and the rise of Japanese militarism in the area, in part because of their sense of a longstanding friendship with China. On the other hand, most U.S. officials believed that it had no vital interests in China worth going to war over with Japan. Moreover, the domestic conflict between Chinese Nationalists and Communists left U.S. policymakers uncertain of success in aiding such an internally divided nation. As a result, few U.S. officials recommended taking a strong stance prior to 1937, and so the United States did little to help China for fear of provoking Japan. U.S. likelihood of providing aid to China increased after July 7, 1937, when Chinese and Japanese forces clashed on the Marco Polo Bridge near Beijing, throwing the two nations into a full-scale war. As the United States watched Japanese forces sweep down the coast and then into the capital of Nanjing, popular opinion swung firmly in favor of the Chinese. Tensions with Japan rose when the Japanese Army bombed the U.S.S. Panay as it evacuated American citizens from Nanjing, killing three. The U.S. Government, however, continued to avoid conflict and accepted an apology and indemnity from the Japanese. An uneasy truce held between the two nations into 1940. 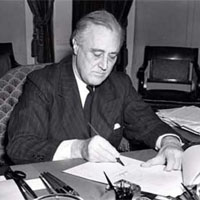 In 1940 and 1941, President Franklin D. Roosevelt formalized U.S. aid to China. The U.S. Government extended credits to the Chinese Government for the purchase of war supplies, as it slowly began to tighten restrictions on Japan. The United States was the main supplier of the oil, steel, iron, and other commodities needed by the Japanese military as it became bogged down by Chinese resistance but, in January, 1940, Japan abrogated the existing treaty of commerce with the United States. Although this did not lead to an immediate embargo, it meant that the Roosevelt Administration could now restrict the flow of military supplies into Japan and use this as leverage to force Japan to halt its aggression in China.

After January 1940, the United States combined a strategy of increasing aid to China through larger credits and the Lend-Lease program with a gradual move towards an embargo on the trade of all militarily useful items with Japan. The Japanese Government made several decisions during these two years that exacerbated the situation. Unable or unwilling to control the military, Japan’s political leaders sought greater security by establishing the “Greater East Asia Co-Prosperity Sphere” in August, 1940. In so doing they announced Japan’s intention to drive the Western imperialist nations from Asia. However, this Japanese-led project aimed to enhance Japan’s economic and material wealth so that it would not be dependent upon supplies from the West, and not to “liberate” the long-subject peoples of Asia. In fact, Japan would have to launch a campaign of military conquest and rule, and did not intend to pull out of China. At the same time, several pacts with Western nations only made Japan appear more of a threat to the United States. First, Japan signed the Tripartite Pact with Germany and Italy on September 27, 1940 and thereby linked the conflicts in Europe and Asia. This made China a potential ally in the global fight against fascism. Then in mid-1941, Japan signed a Neutrality Pact with the Soviet Union, making it clear that Japan’s military would be moving into Southeast Asia, where the United States had greater interests. A third agreement with Vichy France enabled Japanese forces to move into Indochina and begin their Southern Advance. The United States responded to this growing threat by temporarily halting negotiations with Japanese diplomats, instituting a full embargo on exports to Japan, freezing Japanese assets in U.S. banks, and sending supplies into China along the Burma Road. Although negotiations restarted after the United States increasingly enforced an embargo against Japan, they made little headway. Diplomats in Washington came close to agreements on a couple of occasions, but pro-Chinese sentiments in the United States made it difficult to reach any resolution that would not involve a Japanese withdrawal from China, and such a condition was unacceptable to Japan’s military leaders.

Faced with serious shortages as a result of the embargo, unable to retreat, and convinced that the U.S. officials opposed further negotiations, Japan’s leaders came to the conclusion that they had to act swiftly. For their part, U.S. leaders had not given up on a negotiated settlement, and also doubted that Japan had the military strength to attack the U.S. territory. Therefore they were stunned when the unthinkable happened and Japanese planes bombed the U.S. fleet at Pearl Harbor on December 7, 1941. The following day, the United States declared war on Japan, and it soon entered into a military alliance with China. When Germany stood by its ally and declared war on the United States, the Roosevelt Administration faced war in both Europe and Asia.