The Formation of the United Nations, 1945

On January 1, 1942, representatives of 26 nations at war with the Axis powers met in Washington to sign the Declaration of the United Nations endorsing the Atlantic Charter, pledging to use their full resources against the Axis and agreeing not to make a separate peace. 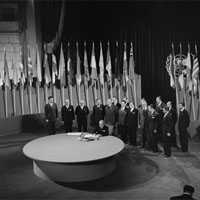 The Founding of the UN in San Francisco

At the Quebec Conference in August 1943, Secretary of State Cordell Hull and British Foreign Secretary Anthony Eden agreed to draft a declaration that included a call for “a general international organization, based on the principle sovereign equality of all nations.” An agreed declaration was issued after a Foreign Ministers Conference in Moscow in October 1943. When President Franklin D. Roosevelt met with Soviet Premier Joseph Stalin in Tehran, Iran, in November 1943, he proposed an international organization comprising an assembly of all member states and a 10-member executive committee to discuss social and economic issues. The United States, Great Britain, Soviet Union, and China would enforce peace as “the four policemen.” Meanwhile Allied representatives founded a set of task-oriented organizations: the Food and Agricultural Organization (May 1943), the United Nations Relief and Rehabilitation Administration (November 1943), the United Nations Educational, Scientific, and Cultural Organization (April 1944), the International Monetary Fund and the World Bank (July 1944), and the International Civil Aviation Organization (November 1944).

U.S., British, Soviet, and Chinese representatives met at Dumbarton Oaks in Washington in August and September 1944 to draft the charter of a postwar international organization based on the principle of collective security. They recommended a General Assembly of all member states and a Security Council consisting of the Big Four plus six members chosen by the Assembly. Voting procedures and the veto power of permanent members of the Security Council were finalized at the Yalta Conference in 1945 when Roosevelt and Stalin agreed that the veto would not prevent discussions by the Security Council. Roosevelt agreed to General Assembly membership for Ukraine and Byelorussia while reserving the right, which was never exercised, to seek two more votes for the United States.

Representatives of 50 nations met in San Francisco April-June 1945 to complete the Charter of the United Nations. In addition to the General Assembly of all member states and a Security Council of 5 permanent and 6 non-permanent members, the Charter provided for an 18-member Economic and Social Council, an International Court of Justice, a Trusteeship Council to oversee certain colonial territories, and a Secretariat under a Secretary General. The Roosevelt administration strove to avoid Woodrow Wilson’s mistakes in selling the League of Nations to the Senate. It sought bipartisan support and in September 1943 the Republican Party endorsed U.S. participation in a postwar international organization, after which both houses of Congress overwhelmingly endorsed participation. Roosevelt also sought to convince the public that an international organization was the best means to prevent future wars. The Senate approved the UN Charter on July 28, 1945, by a vote of 89 to 2. The United Nations came into existence on October 24, 1945, after 29 nations had ratified the Charter.