Repeal of the Chinese Exclusion Act, 1943

In 1943, Congress passed a measure to repeal the discriminatory exclusion laws against Chinese immigrants and to establish an immigration quota for China of around 105 visas per year. As such, the Chinese were both the first to be excluded in the beginning of the era of immigration restriction and the first Asians to gain entry to the United States in the era of liberalization. The repeal of this act was a decision almost wholly grounded in the exigencies of World War II, as Japanese propaganda made repeated reference to Chinese exclusion from the United States in order to weaken the ties between the United States and its ally, the Republic of China. The fact that in addition to general measures preventing Asian immigration, the Chinese were subject to their own, unique prohibition had long been a source of contention in Sino‑American relations. There was little opposition to the repeal, because the United States already had in place a number of measures to ensure that, even without the Chinese Exclusion Laws explicitly forbidding Chinese immigration, Chinese still could not enter. The Immigration Act of 1924 stated that aliens ineligible for U.S. citizenship were not permitted to enter the United States, and this included the Chinese. 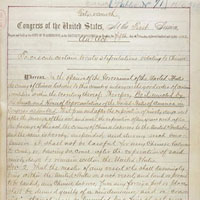 The Repeal of the Chinese Exclusion Act

More controversial than repeal was the proposal to go one step further and place the Chinese on a quota basis for future entry to the United States. By finally applying the formulas created in the 1924 Immigration Act, the total annual quota for Chinese immigrants to the United States (calculated as a percentage of the total population of people of Chinese origin living in the United States in 1920) would be around 105. In light of the overall immigration to the United States, at first glance the new quota seemed insignificant. Yet, those concerned about an onslaught of Chinese (or Asian) immigration and its potential impact on American society and racial composition believed that even this small quota represented an opening wedge through which potentially thousands of Chinese could enter the United States. Because migration within the Western Hemisphere was not regulated by the quota system, it seemed possible that Chinese residents in Central and South America would re-migrate to the United States. Moreover, if the Chinese of Hong Kong were to apply under the vast, largely unused British quota, thousands could enter each year on top of the number of available Chinese visas.

Fears about the economic, social, and racial effect of a “floodtide” of Chinese immigrants led to a compromise bill—fears that mirrored the xenophobic arguments that had led to Chinese Exclusion in the first place, some sixty years previously. Under this bill, there would be a quota on Chinese immigration, but, unlike European quotas based on country of citizenship, the Chinese quota would be based on ethnicity. Chinese immigrating to the United States from anywhere in the world would be counted against the Chinese quota, even if they had never been to China or had never held Chinese nationality. Creating this special, ethnic quota for the Chinese was a way for the United States to combat Japanese propaganda by proclaiming that Chinese were welcome, but at the same time, to ensure that only a limited number of Chinese actually entered the country.

President Franklin D. Roosevelt threw the weight of his office behind the compromise measure, connecting the importance of the measure to American wartime goals. In a letter to Congress, Roosevelt wrote that passing the bill was vital to correcting the “historic mistake” of Chinese exclusion, and he emphasized that the legislation was “important in the cause of winning the war and of establishing a secure peace.”

The repeal of Chinese exclusion paved the way for measures in 1946 to admit Filipino and Asian-Indian immigrants. The exclusion of both of these groups had long damaged U.S. relations with the Philippines and India. Eventually, Asian exclusion ended with the 1952 Immigration Act, although that Act followed the pattern of the Chinese quota and assigned racial, not national, quotas to all Asian immigrants. This system did not end until Congress did away with the National Origins quota system altogether in the Immigration Act of 1965.