By the late 1930s, the United States continued its efforts to stay out of the wars in Europe and Asia. As the failure of disarmament, the peace movement, and the doctrine of appeasement became clear, Congress passed a series of neutrality acts designed to prevent the United States from being drawn into the widespread international conflict that the U.S. Government believed to be inevitable. 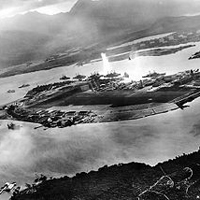 In 1940, U.S. policy slowly began to shift from neutrality to non-belligerency by providing aid to the nations at war with the Axis Powers—Germany, Italy and Japan. In response to the growing emergency, President Franklin D. Roosevelt called upon the American people to prepare for war. On December 7, 1941, the Japanese attacked the U.S. naval installation at Pearl Harbor, and the United States formally entered the Second World War. Meetings between those powers allied in the war against the Axis powers provided the framework for the postwar world. Two major issues would become of major importance to postwar foreign policy, the prevention of another global conflict and the influence of nuclear weapons on the international balance of power.