President Franklin Delano Roosevelt took office determined to improve relations with the nations of Central and South America. Under his leadership the United States emphasized cooperation and trade rather than military force to maintain stability in the hemisphere. In his inaugural address on March 4, 1933, Roosevelt stated: “In the field of world policy I would dedicate this nation to the policy of the good neighbor—the neighbor who resolutely respects himself and, because he does so, respects the rights of others.” 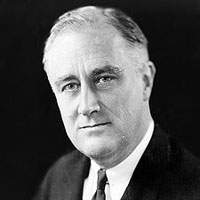 Roosevelt’s Secretary of State, Cordell Hull, participated in the Montevideo Conference of December 1933, where he backed a declaration favored by most nations of the Western Hemisphere: “No state has the right to intervene in the internal or external affairs of another”. In December Roosevelt stated, “The definite policy of the United States from now on is one opposed to armed intervention.” In 1934 at Roosevelt’s direction the 1903 treaty with Cuba (based on the Platt Amendment) that gave the United States the right to intervene to preserve internal stability or independence was abrogated. Although domestic economic problems and World War II diverted attention from the Western Hemisphere, Roosevelt’s Good Neighbor policy represented an attempt to distance the United States from earlier interventionist policies, such as the Roosevelt Corollary and military interventions in the region during the 1910s and 1920s.