The Warsaw Treaty Organization (also known as the Warsaw Pact) was a political and military alliance established on May 14, 1955 between the Soviet Union and several Eastern European countries. The Soviet Union formed this alliance as a counterbalance to the North Atlantic Treaty Organization (NATO), a collective security alliance concluded between the United States, Canada and Western European nations in 1949. 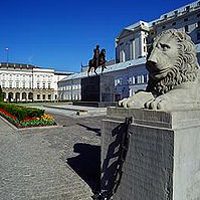 Presidential Palace in Warsaw where the Warsaw Pact was signed

The Warsaw Pact supplemented existing agreements. Following World War II, the Soviet Union had concluded bilateral treaties with each of the East European states except for East Germany, which was still part of the Soviet occupied-territory of Germany. When the Federal Republic of Germany entered NATO in early May 1955, the Soviets feared the consequences of a strengthened NATO and a rearmed West Germany and hoped that the Warsaw Treaty Organization could both contain West Germany and negotiate with NATO as an equal partner. Soviet leadership also noted that civil unrest was on the rise in Eastern European countries and determined that a unified, multilateral political and military alliance would tie Eastern European capitals more closely to Moscow.

The original signatories to the Warsaw Treaty Organization were the Soviet Union, Albania, Poland, Czechoslovakia, Hungary, Bulgaria, Romania, and the German Democratic Republic. Although the members of the Warsaw Pact pledged to defend each other if one or more of them came under attack, emphasized non-interference in the internal affairs of its members, and supposedly organized itself around collective decision-making, the Soviet Union ultimately controlled most of the Pact’s decisions. The Soviet Union also used the Pact to contain popular dissent in its European satellites, for example in Hungary in 1956, in Czechoslovakia in 1968, and in Poland in 1981.

By the 1980s, the Warsaw Treaty Organization was beset by problems related to the economic slowdown in all Eastern European countries. By the late 1980s political changes in most of the member states made the Pact virtually ineffectual. In September 1990, East Germany left the Pact in preparation for reunification with West Germany. By October, Czechoslovakia, Hungary, and Poland had withdrawn from all Warsaw Pact military exercises. The Warsaw Pact officially disbanded in March and July of 1991 following the dissolution of the Soviet Union.