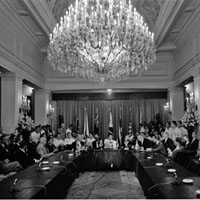 The purpose of the organization was to prevent communism from gaining ground in the region. Although called the “Southeast Asia Treaty Organization,” only two Southeast Asian countries became members. The Philippines joined in part because of its close ties with the United States and in part out of concern over the nascent communist insurgency threatening its own government. Thailand, similarly, joined after learning of a newly established “Thai Autonomous Region” in Yunnan Province in South China, expressing concern about the potential for Chinese communist subversion on its own soil. The rest of the region was far less concerned about the threat of communism to internal stability. Burma and Indonesia both preferred to maintain their neutrality rather than join the organization. Malaya (including Singapore) found it politically difficult to give formal support to the organization, though through its ties with Great Britain it learned of key developments. Finally, the terms of the Geneva Agreements of 1954 signed after the fall of French Indochina prevented Vietnam, Cambodia and Laos from joining any international military alliance, though these countries were ultimately included in the area protected under SEATO and granted “observers” status.

Most of the SEATO member states were countries located elsewhere but with an interest in the region or the organization. Australia and New Zealand were interested in Asian affairs because of their geographic position in the Pacific. Great Britain and France had long maintained colonies in the region and were interested in developments in the greater Indochina region. For Pakistan, the appeal of the pact was the potential for receiving support in its struggles against India, in spite of the fact that neither country was located in the area under the organization’s jurisdiction. Finally, U.S. officials believed Southeast Asia to be a crucial frontier in the fight against communist expansion, so it viewed SEATO as essential to its global Cold War policy of containment.

Headquartered in Bangkok, Thailand, SEATO had only a few formal functions. It maintained no military forces of its own, but the organization hosted joint military exercises for member states each year. As the communist threat appeared to change from one of outright attack to one of internal subversion, SEATO worked to strengthen the economic foundations and living standards of the Southeast Asian States. It sponsored a variety of meetings and exhibitions on cultural, religious and historical topics, and the non-Asian member states sponsored fellowships for Southeast Asian scholars.

Beyond its activities, the SEATO charter was also vitally important to the American rationale for the Vietnam War. The United States used the organization as its justification for refusing to go forward with the 1956 elections intended to reunify Vietnam, instead maintaining the divide between communist North Vietnam and South Vietnam at the 17th parallel. As the conflict in Vietnam unfolded, the inclusion of Vietnam as a territory under SEATO protection gave the United States the legal framework for its continued involvement there.

The organization had a number of weaknesses as well. To address the problems attached to the guerrilla movements and local insurrections that plagued the region in the post-colonial years, the SEATO defense treaty called only for consultation, leaving each individual nation to react individually to internal threats. Unlike the North Atlantic Treaty Organization (NATO), SEATO had no independent mechanism for obtaining intelligence or deploying military forces, so the potential for collective action was necessarily limited. Moreover, because it incorporated only three Asian members, SEATO faced charges of being a new form of Western colonialism. Linguistic and cultural difficulties between the member states also compounded its problems, making it difficult for SEATO to accomplish many of its goals.