In April, 1955, representatives from twenty-nine governments of Asian and African nations gathered in Bandung, Indonesia to discuss peace and the role of the Third World in the Cold War, economic development, and decolonization. 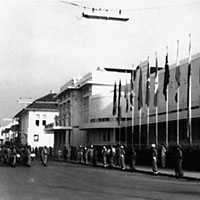 Gedung Merdeka in Bandung during the Asia-Africa Conference in 1955

The core principles of the Bandung Conference were political self-determination, mutual respect for sovereignty, non-aggression, non-interference in internal affairs, and equality. These issues were of central importance to all participants in the conference, most of which had recently emerged from colonial rule. The governments of Burma, India, Indonesia, Pakistan and Sri Lanka co-sponsored the Bandung Conference, and they brought together an additional twenty-four nations from Asia, Africa and the Middle East. Because the decolonization process was still ongoing, the delegates at the conference took it upon themselves to speak for other colonized peoples (especially in Africa) that had not yet established independent governments. The delegates built upon the Five Principles of Peaceful Coexistence, worked out in negotiations between India and China in 1954, as they sought to build solidarity among recently independent nations.

At the close of the Bandung Conference attendees signed a communique that included a range of concrete objectives. These goals included the promotion of economic and cultural cooperation, protection of human rights and the principle of self-determination, a call for an end to racial discrimination wherever it occurred, and a reiteration of the importance of peaceful coexistence. The leaders hoped to focus on the potential for collaboration among the nations of the third world, promoting efforts to reduce their reliance on Europe and North America.

The Bandung Conference and its final resolution laid the foundation for the nonaligned movement during the Cold War. Leaders of developing countries banded together to avoid being forced to take sides in the Cold War contest. The initial motivation for the movement was the promotion of peace. In the 1970s it grew increasingly radical in its condemnation of the policies of the Cold War super powers. Although the nonaligned movement continued until the end of the Cold War, the solidarity produced by the “spirit of Bandung” had weakened by end of the 1960s, by which time most of the original participants in the conference were no longer in power in their respective countries.

The United States Government initially viewed the Bandung Conference, and the nonaligned movement that emerged from it, with caution. Observers in the United States expressed concern that the meeting was a sign of a leftward shift in the ideological leanings of the newly independent nations of Africa and Asia. Moreover, the conference revealed two contradictions in U.S. foreign policy with regard to decolonization in the Third World. First, the United States Government found itself caught between its desire to support decolonization and self-determination in Southeast Asia and Africa and its reliance on the colonial powers of Western Europe as allies against the communist Eastern Bloc. Cooperation with Britain, France and the Netherlands was vital to U.S. policy in Europe, but supporting decolonization would be tantamount to opposing those allies. Second, the conference coincided with a fundamental shift in U.S. race relations. The 1954 Brown v. the Board of Education decision had declared school segregation unconstitutional, but the process of ending the Jim Crow laws in the American South was long and difficult. Many countries around the world, particularly newly independent nations, followed the U.S. civil rights movement with interest and questioned the extent to which U.S. rhetoric of equality and self-determination matched the status of civil rights in the United States. U.S. leaders worried that the anti-colonialism of Bandung and the discussion of global racial politics taking place there could turn anti-American or anti-Western.

In the end, however, the Bandung Conference did not lead to a general denunciation of the West as U.S. observers had feared. Instead, the participants displayed a wide range of ideologies and loyalties. U.S. allies in Asia were able to represent their shared interests with the United States in the conference meetings, and Chinese Premier Zhou Enlai took a moderate line in his speeches to the delegates. Nevertheless, Bandung gave a voice to emerging nations and demonstrated that they could be a force in future world politics, inside or outside the Cold War framework.