On July 26, 1956, Egyptian President Gamal Abdel Nasser announced the nationalization of the Suez Canal Company, the joint British-French enterprise which had owned and operated the Suez Canal since its construction in 1869. Nasser’s announcement came about following months of mounting political tensions between Egypt, Britain, and France. Although Nasser offered full economic compensation for the Company, the British and French Governments, long suspicious of Nasser’s opposition to the continuation of their political influence in the region, were outraged by the nationalization. The Egyptian leader, in turn, resented what he saw as European efforts to perpetuate their colonial domination. 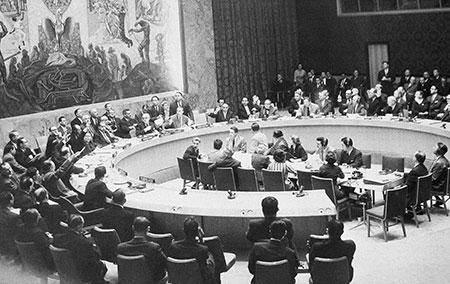 The Eisenhower administration, worried by the prospect of the outbreak of hostilities between its NATO allies and an emergent, influential Middle Eastern power (and the possible intervention of the Soviet Union in such a conflict), attempted to broker a diplomatic settlement of the British-French-Egyptian dispute. On September 9, U.S. Secretary of State John Foster Dulles proposed the creation of a Suez Canal Users’ Association (SCUA), an international consortium of 18 of the world’s leading maritime nations, to operate the Canal. Although SCUA would have given Britain, France, and Egypt an equal stake in the Canal, this, and various other U.S. and international mediation efforts failed to win the full support of any of the contending powers.

In discussions with the United States between August and October, the British Government repeatedly hinted that it might resort to force in dealing with Nasser. At the same time, the British and French held secret military consultations with Israel, who regarded Nasser as a threat to its security, resulting in the creation of a joint plan to invade Egypt and overthrow its President. In keeping with these plans, Israeli forces attacked across Egypt’s Sinai Peninsula on October 29, 1956, advancing to within 10 miles of the Suez Canal. Under the pretext of protecting the Canal from the two belligerents, Britain and France landed troops of their own a few days later.

In response, the Eisenhower administration, concerned about dissociating the United States from European colonialism—especially in light of its strident condemnation of the Soviet intervention in Hungary the same week—as well as the possibility that the Soviets would intervene to assist Nasser, pressured Britain and France to accept a United Nations ceasefire on November 6. Moreover, the United States voted for U.N. resolutions publicly condemning the invasion and approving the creation of a U.N. peacekeeping force. Washington’s public censure of two of its most important allies temporarily soured relations with London and Paris and helped contribute to the resignation of British Prime Minister Anthony Eden in January 1957. Concurrently, U.S. worries about the continued viability of European (particularly British) political and military power in the Middle East in the aftermath of the Suez Crisis prompted the creation of the Eisenhower Doctrine, which gave the administration increased power to aid countries in the region. By March 1957, however, the U.S.–U.K. bilateral relationship had recovered under Eden’s successor, Harold Macmillan.