Khrushchev and the Twentieth Congress of the Communist Party, 1956

In February, 1956, Soviet leader Nikita Khrushchev made a keynote address to international communist leaders at the Twentieth Congress of the Communist Party of the Soviet Union. He used his speech to make unexpected and unprecedented condemnations of the policies and excesses of his predecessor, Joseph Stalin, setting off a chain of reaction that led to calls for reform in Eastern Europe and a new policy in the Soviet Union for dealing with the West. 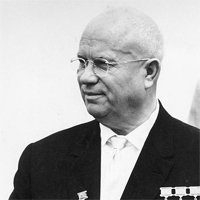 After Stalin died in 1953, four men joined together to lead the country: Georgi Malenkov, Lavrenti Beria, Vyacheslav Molotov, and Nikita Khrushchev. As head of the KGB, Beria was perceived as a threat to the other three, and they arranged for his execution. As Soviet Premier in 1953, Malenkov oversaw the first signs of the Soviet “peace offensive,” in which a series of overtures to the West indicated the beginning of a change in party policies. By 1955, however, Khrushchev had consolidated his power, forcing Malenkov to resign as Premier due to his close ties with Beria, and Khrushchev emerged as the sole leader.

The Party Congress was an organization that included some 1,500 Communist leaders from fifty-six countries around the world, and its twentieth meeting opened in Moscow on February 14, 1956. The Congress convened roughly every four years, and it served as the major forum through which the central leadership in Moscow informed communists from across the world about policies and ideology. In a private session of the Soviet representatives which was closed to foreign delegations, Nikita Khrushchev gave a speech denouncing Stalin. The new Soviet leader had spent many hours deliberating about his message to the gathering. In preparation for his participation in the Party Congress, Khrushchev had joined the Presidium of the Supreme Soviet, an executive governing body in the Soviet government, in a two-month debate about Stalin’s legacy and the extent to which his successors could be publicly critical of Stalinist policies. Khrushchev was keenly aware of the fact that if he gave a speech that proved too critical of Stalin or which seemed to criticize the Communist system rather than just the former leader and the word of it spread, it could give Communism’s opponents and international anti-communists ammunition against the Soviet Union and the international movement as a whole. However, he saw the Party as being in danger of stagnation from years of oppression and Stalinist purges, so calling for decentralization and denouncing the areas in which Stalin had strayed from socialist ideology was a way to revitalize the party and secure his own position as its leader.

When Khrushchev finally made his “secret speech,” he shocked the gathered representatives at the Party Congress. Over the course of his address, he condemned the brutality of the Stalinist regime, particularly the purges that led to the torture and execution of some wholly innocent party loyalists. Khrushchev was careful not to extend his condemnation to the persecution of non-communists, because as a rising star of the Communist Party he too had played a role in these purges. Instead, he noted the ways in which Stalin had misinterpreted and misrepresented otherwise correct ideas and Marxist-Leninist thought in a paranoid determination to stay in power. In terms of foreign policy, Khrushchev reversed the Stalinist policy which assumed that a war with the capitalist West was inevitable and instead advocated a new policy of “peaceful coexistence.” Because it reconsidered Stalin’s legacy, the address became known as “Stalin’s Second Funeral.” The speech became the opening salvo in a larger effort at reforming the party and making it more efficient, but it also had important consequences for Soviet external relations. 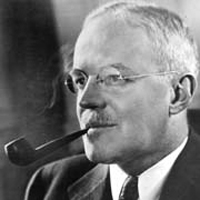 Khrushchev’s speech was supposed to be private. It was intended only for internal Communist Party consideration, but word of the events unfolding at the Twentieth Party Congress quickly traveled across the Iron Curtain. In addition to the rumors of what had been said, Israeli intelligence officers obtained a copy of the complete speech and shared it with the Eisenhower Administration. Reactions varied. U.S. CIA chief, Allen Dulles, struck by the unexpected reversal in policy espoused in the speech, wondered if Khrushchev had been drunk and speaking extemporaneously. After an internal debate in the CIA, Dulles suggested to his brother and Secretary of State, John Foster Dulles, that the United States leak the speech to the press. Eisenhower agreed, and it was sent to the New York Times.

In the immediate aftermath of the speech, the course of de-Stalinization suited U.S. interests, as the internal crisis that was expected to emerge out of the shift in policy temporarily paralyzed the Soviet Union. The Eisenhower Administration watched, but did not interfere, as the speech became the impetus for a series of grassroots movements demanding democratic reforms in Eastern Europe. Protests broke out in Poland and Hungary in the summer and autumn of 1956, both with tragic consequences. In Poland, the Communist Party leadership proved uncertain how to address the demonstrations, and overreacted by sending in a military force to put down the protest. The situation in Hungary was even more extreme and month-long demonstrations ended with Soviet military intervention and thousands of casualties. In Asia, Communist leaders in the People’s Republic of China and Vietnam expressed grave doubts about the reforms indicated by Khrushchev.

Although Khrushchev played a role in shutting down the rebellions in the Soviet satellites in Eastern Europe, he followed up on his address to the Twentieth Party Congress by continuing to advocate reforms and increased cooperation with the West. As a result, there were early signs of détente in the late 1950s, even though progress was delayed first by the U-2 incident and later by the Cuban Missile Crisis.